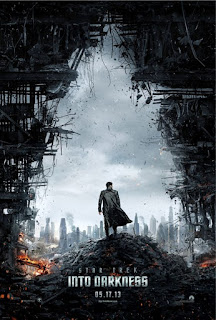 After an away mission goes terribly wrong, James T. Kirk (Chris Pine) finds himself temporarily demoted from captaining the USS Enterprise. Then a terrorist attack in London brings him back into the fold, and commanding the Enterprise once again on a trek... into darkness.

It's such a silly title. It doesn't even have a colon: it's not Star Trek: Into Darkness. There is no sub-title here, it's just one sentence, like Indiana Jones and the Temple of Doom. Star Trek Into Darkness. It makes me think they just need to turn the lights on. Then again, it's yet another Hollywood film retro-fitted into 3D, so given the dimming effect of those polarised 3D glasses, Star Trek Into Darkness is weirdly appropriate.

This is a mostly great film dragged back by a few elements of monumental stupidity. The stupid bits aren't easy to discuss without revealing key elements of the plot, so we'll put the rest of this review under a cut.

The first thing to say is that all of the elements that made Star Trek (the last film, not the series) such a success are still in place. The lead cast do a marvellous job, the dialogue is snappy and amusing, and the action is exciting and dramatic. The film is littered with continuity references to please the hardcore (Klingons, Section 31, a tribble, Christine Chapel, et al), while the plot is likely clear enough to entertain a mainstream audience at the same time. There are some very weird choices regarding costuming (seriously: when did the Federation start dressing up as Star Wars' Empire?) but design-wise it's mostly great as well.

It was nice to see the film get a second female lead in Carol Marcus (another neat nod to the fans, since the character previously/later appears in The Wrath of Khan, love child in tow), although her inclusion was marred somewhat by a bizarrely gratuitous shot of the character in her underwear.

Then we get to the film's villain.

Rumours were circulating around this movie pretty much from when it was announced, all of them indicating that classic Trek villain Khan Noonien Singh would be appearing. I didn't believe these rumours could possibly be true: (a) it would be remarkably trite and obvious to feature Khan as a villain, (b) Ricardo Montalban's performance in "Space Seed" and Star Trek: The Wrath of Khan was so iconic that it would be foolish to make a different actor reprise the role, (c) Khan was from the 1990s, which was the future in the original series but is of course now nearly 20 years into the past and therefore a bit farcical, and (d) given that English actor Benedict Cumberbatch had been announced as the villain it would seem borderline offensive to replace a Hispanic actor playing a character with an Indian name with a white English guy.

So, as you are probably aware, Cumberbatch is indeed playing everybody's favourite intergalactic Hispanic/Indian psychopath, only posher and whiter, and still from 20 years in the audience's past. Somehow. To be honest nothing about his inclusion in the film makes a lick of sense. Admiral Marcus (Peter Weller) explains that Khan was found in deep space and revived to help prepare for an inevitable Federation-Klingon war, however on the basis of what's demonstrated on screen all Khan did was recommend Marcus build a really large starship with lots of guns. You have to ask how much valuable strategic advice a 20th century psychopath could give a 23rd century admiral anyway.

Marcus' massive battleship causes another problem for Star Trek Into Darkness, since it marks the third Trek film in a row in which the climax involves the Enterprise getting shot to pieces by a massive battleship. We already saw this fight four years ago in Star Trek, with Nero's mega-mining ship, and before that we saw Tom Hardy's uber-Romulan cruiser take on Captain Picard. As Scotty once said, 'Fool me once, shame on you. Fool me twice, shame on me,' and as Grant says right now, 'Fool me three times, okay I'm bored now.'

Most egregious among the climax's faults - and it's a very long, Cameron-esque climax - is the revisitation of the climax to The Wrath of Khan, only with Kirk sacrificing his life in a radioactive chamber and Spock screaming "Khan!". It's a dreadful scene: ill-thought out in concept and awfully trite in execution. It takes a critical scene from the best of the Star Trek movies and makes a deliberate mockery of it, sacrificing drama or nuance for a chance to nudge and wink at the hardcore fanbase, whispering 'See? You see what we did there? Get it?' For one thing the Wrath of Khan climax worked because it actually killed Spock. The Into Darkness climax leaves you drumming your fingers waiting for Kirk to be magically brought back to life.

So in the end this is basically two-thirds of a great action flick married to one-third of a bang-your-head-against-the-wall-until-unconscious insult to its audience. It's not quite as satisfying as its predecessor, although its best bits are likely better than the best bits of that film. It's a shame they revisited Khan in the manner that they did: if nothing else I think Benedict Cumberbatch deserved a villain of his own.
Posted by Grant at 9:45 AM