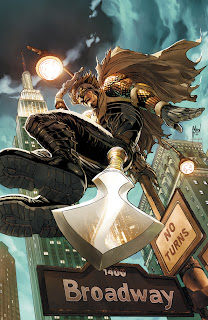 I'll get to reviewing this week's comics in a minute. First, let's talk about DC Comics' trade paperback publishing schedule.

The first volume of Talon is coming out in August. It's a paperback collection that includes the first eight issues of the comic, and comes four months after the last issue in the book was released to stores. Just think if DC had released it one month later instead of four: then readers who tried out the first volume and wanted to read more could just pick up the monthly book without skipping an issue.

You think the situation is bad for Talon, though? You should check out the release schedules for some other New 52 titles. The first Worlds' Finest trade paperback shipped in April, six months after the last issue it collects was published. The next volume of Batwoman will ship in September, seven months after the last issue of that storyline was published. Issue #16 of All-Star Western was published in January 2013; you will have to wait until November to read that in a trade paperback. Volume 2 of The Flash is coming out in hardcover in August, a stunning 12 months after the last issue in that collection was released into stores. Volume 1 is finally getting a release in paperback the same month: the most recent issue in that collection was published in April 2012. (Basically, if you wanted to read The Flash, didn't want to buy single issues and couldn't afford the hardcover, you are now 16 months behind the regular comic.)

Let's take another example, then, only this time from a different publisher. Image Comics released the first volume of Brian K. Vaughn and Fiona Staple's Saga in a one-month gap between the publication of issue #6 and issue #7. Anyone who bought this first trade paperback could continue reading the story in instalments within four weeks. Now issue #6 of Saga sold roughly 40,000 copies to the direct market (comic shops). The following month approximately 15,000 copies of Saga Volume 1 shipped to stores, and the month after that the sales of Saga #7 jumped up to 53,000.

I worry there's an attitude within DC Comics that by delaying the release of collected editions they are somehow encouraging readers to purchase the individual issues, when in fact the exact opposite is true. Not entirely convinced? Let's take a less popular Image book: Tim Seeley and Mike Norton's Revival. Issue #5 sold 14,000 copies in November 2012. The first collected volume shipped in December, selling about 3,400 copies to the direct market. In January 2013 Revival #6 sold 17,400 copies: that's a 24% sales bump.

If DC wants a hope in hell of launching some successful mid-to-long term comic series with the New 52, ones that don't rely on 50 year-old superhero franchises to support them, they absolutely have to pick up the publishing schedule on their collected editions. At the moment they're just throwing their sales away, and stifling the potential for a more diverse, original and popular DC Universe.

That was a bit longer than usual. Sorry about that: here are the comic book reviews!

Bruce Wayne faces off against Clayface in the second-part of this surprisingly old-fashioned storyline. It's been a real palette cleanser for the book, which has largely dedicated itself to long, intricate and world-changing stories like "The Court of Owls" and "Death of the Family". This issue not only manages to really define Clayface for the New 52, it also marks the debut of a highly significant bit of Batman technology that's never made it into the book before. I for one was extremely excited. (5/5)

Batman's grieving period for Damian continues in this largely self-contained issue in which he and Red Hood team up to take out a group of professional snipers. I like that, while Batman Incorporated goes about the business of straight-forward revenge, Batman and Robin is taking the time to actually explore how Bruce would react to his son's death. At this point he's still looking for ways to resurrect Damian: this issue was all about rage, next issue (featuring Batgirl) is about bargaining. It feels like we're going to be put through a hell of an emotional wringer by the time we hit 'acceptance'. (4/5)

The first story ends with this third issue, and it's reasonably safe to say that John Constantine has - in broad terms - survived the transition back from self-contained DC Vertigo stories to the DC Universe proper. There's some great, deeply nasty magic going on here, and a surprising amount of horror. I'm happy to report that Constantine wins the day essentially by making bargains he can't keep and cheating people he can't afford to cheat. It feels like some long-term stuff is being established too, which bodes well. Sales of the first two issues have been about three times as large as those of the last year or two of Hellblazer, so it looks like we'll have John around for a while yet. (3/5)

I really enjoyed this issue, because it focused less on action and more on character development (that said, there is still time for a giant octopus fight). This is a great cast, and Venditti has really demonstrated an ability to push them on from where Paul Cornell finished off. Most impressive of all, now that the vampire threat (last issue) has been averted, Venditti neatly steers the plot right back to tie into the first two story arcs again. Given that this title can't have too many more months before DC pulls the plug, it's great to see that it will likely end as a strong, self-contained long arc with beginning, middle and end: you can't reasonably ask for anything better. (3/5)

I've given this book three issues (this one is two weeks late) and I honestly am not getting any strong sense of what story Johns is attempting to tell. There's a team - sort of - but they don't really appear as one, and there's no kind of strong narrative direction going on here. He also continues to make several of the characters oddly unpleasant: Hawkman's a violent thug, Vibe is incompetent, Catwoman is tedious to read about, and the Martian Manhunter is disturbingly creepy. It's also an extra $1.00 a month in return for fairly inconsequential backup stories about how creepy Martian Manhunter is. At this stage, I think I'm done. (2/5)

Sales have plummeted on this book for the first three issues, pretty much ensuring this is now an eight-issue miniseries. It's a pity: Nocenti and Sanchez have settled nicely into telling a very interesting story with a flawed, fascinating protagonist and some interesting twists. I particularly like the New 52 version of the Creeper, re-imagined as a Japanese spirit. This sort of re-imagining is something that DC should have been doing from the New 52's start, but at least we're getting some really fresh directions now. (4/5)

I am heartened by the news that Dark Horse will continue publishing Star Wars comics through 2014 at the very least. This monthly ongoing by Brian Wood has continued to be the most Star Wars-esque spin-off since the original trilogy. It helps that it's set between Star Wars and The Empire Strikes Back, but it also helps that (a) Wood really has his finger on the pulse of what made the original trilogy work, and (b) this book is littered with neat little continuity references to the films. My favourite part of this issue was the revelation that Boba Fett and Bossk are hot on Han and Chewie's tail. If you're a Star Wars fan, you really need to read this book. It's absolutely brilliant tie-in fiction. (4/5)

I swear this book has been better with every issue. It's a literate, clever, evocative and stunning science fiction drama. It is rich in character, littered with great ideas, and follows an increasingly gripping and unexpected plot. Braithwaite and Arreola's artwork only enhances David Hine's story. When people discuss the rise of science fiction in American comics, they need to remember this book: it is absolutely up there with the likes of Saga, Manhattan Projects and Prophet. If you like comics and science fiction, you should be reading Storm Dogs. If you're registered to nominate books for the 2014 Hugo Awards, you need to read this book and nominate it next year. It's that damned good. (5/5)

Gorr's giant god-destroying bomb nears completion, while young Thor looks for ways to start a rebellion. Meanwhile present-day Thor and grumpy ancient Thor set on their way to destroy Gorr once and for all. I absolutely adore this storyline, and how effectively Aaron is writing three different Thors and manage to make them all feel completely distinct while also feeling very much like different iterations of the same person. This issue marks what we might tackily refer to as 'the money shot': all three Thors united for the first time since this triple time-period storyline was introduced. There are also three surprising new characters that I expect will be cropping up again in the future: I won't spoil who they are here, but it was a new development for Thor's supporting cast of which I wholeheartedly approve. (5/5)

Winner of the Week: Storm Dogs. This series has crept up on me, changing my interest from keen, to enthused, to obsessive, one month after the other.
Loser of the Week: Justice League of America. With a legacy as rich and significant as this book has, it shouldn't be allowed to be this mediocre.