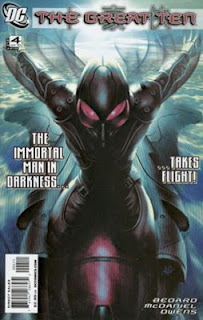 I love the concept of the Great Ten, the Chinese superhero team created as part of the epic weekly series 52. I'm not sure which of that title's four writers created the team, but you'd be a fool not to see Grant Morrison's fingers all over them. They are a state-supported group of 'super-functionaries', pledged to the defence of the People's Republic against alien invasion, super-powered villains and other major threats to the Chinese people.

They are outstandingly Chinese, with names like August General in Iron, Accomplished Perfect Physician and Shaolin Robot. They're steeped in Chinese mythology and culture, and are an engaging, outstandingly original twist on the standard Justice League model of superhero teams.

It was great that DC expanded the Great Ten out into their own 10-issue miniseries, unfortunately they waited an astonishing four years to do so. So much for striking while the iron was hot. In the end the miniseries sold so badly that it lost an issue and finished its run with issue #9 - which sold a horrifying 5,800 copies. I've never seen a DCU series sell that poorly.

So let's look at issue #4. The Great Ten have confronted what initially appeared to be a group of actual Chinese Gods, but who now appear to be a group of super-humans brainwashed into believing they are Gods. No one has managed to tell that to the Great Ten's Celestial Archer, who's jumped sides and now fights for the false Gods. In issue #4 the Immortal Man in Darkness - a sort of terminally ill Batman who flies a biological super-plane - confronts the wind god Feng Po over the streets of Shanghai.

This is a great launch series for a super-team because while there's an overall story arc that pulls through all nine issues, each individual book also provides a flashback to the origin of each team member. Here we discover that the Immortal Man in Darkness will rapidly die by using the Dragonwing, a Chinese-built biological super-plane developed using alien technology. The Immortal Man we follow here is, in fact, the fifth pilot, but because he wears a mask as far as the public is aware he's the same guy. This is such a wonderfully dark, macabre concept, with each succeeding pilot laying down his life because he believes so utterly in defending his country.

Tony Bedard writes a good script here, fleshing out the original ideas from 52 and establishing a great set of characters in the process. Scott McDaniel's artwork is, to be honest, not ideal; his cartoony, exaggerated style is probably the opposite of what the series needed. How wonderful would it have been to find a Chinese artist to bring these characters to life, using a style akin to Teddy Boys or The Storm Riders?

Sadly the astonishing failure of this miniseries to find an audience (it was, to my knowledge, never collected in trade) has pretty much guaranteed we'll never see the team get their own book again. The Great Ten did make a few guest appearances as time went on, and August General in Iron featured in the New 52's short-lived Justice League International, but for now they wait as a missed opportunity - waiting in vain for somebody to give them another chance.
Posted by Grant at 9:22 AM