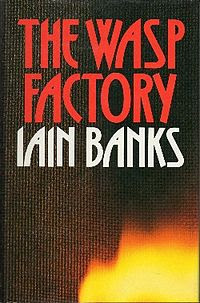 Books of May highlights books - both fiction and non-fiction - that have engaged, entertained or otherwise made a significant impact on me over the years. The goal is to highlight one book a day for the entire month. Today, book #4: The Wasp Factory, by Scottish author Iain Banks.

Frank Cauldhame is a deeply troubled sixteen year-old boy who lives on a small Scottish island with his father. He tortures small animals. He may be a murderer. When Frank's older brother escapes from a mental institution and plans a return to his family, he sets Frank onto a collision course with the truth about his family.

The Wasp Factory was the debut novel for acclaimed Scottish novelist Iain Banks, and it is a rough, scabby and quite unpleasant book. It's also distinctive, strikingly original and gripping from beginning to end. Banks has certainly written better novels than this, but like many first novels I think it retains an extraordinary amount of energy. It's a relatively short novel, and it rockets along like nobody's business. Ever since reading it the first time, I've never quite managed to get it out of my head.

Crucial to how this book develops is that it is told from a first-person perspective. Frank lives a very dark and distasteful life, but by exposing that life from Frank's own perspective we are able to identify with him a lot more than we might otherwise have done. Banks also makes Frank incredibly - and inappropriately - funny. I don't know what it says about me that I found numerous sections of this book absolutely hilarious.

This was an incredibly controversial book when first published. The Irish Times famously described it as 'a work of unparalleled depravity'. It certainly isn't, but neither is it a book that's going to appeal to everybody. I haven't read all of Banks' subsequent novels, but I'm pretty sure he never wrote anything quite this confrontational again. Once read, forever remembered, like a small wound that simply won't heal.
Posted by Grant at 10:45 PM