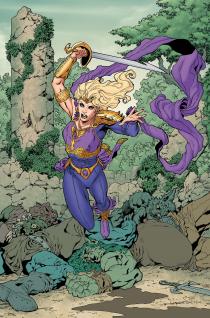 There's something cool about the fact that of the nine comic books I purchased this week, five of them feature female protagonists: Batgirl, Batwoman, It Girl and the Atomics, Sword of Sorcery and Wonder Woman. It seems like only last year we were still all bemoaning the lack of female characters in American comic books. Now sure, of those five books two of them (It Girl and Sword of Sorcery) have been cancelled, but it still feels like an impressive development.

The first step was getting the big two superhero publishers to start publishing more female characters and I think they are doing it - the next step is to actually get people reading them. Red She-Hulk was cancelled this week as well, and Captain Marvel is looking relatively shaky. I'm wondering: is the problem that readers (still primarily male) aren't interested, or is it that publisher's aren't highlighting these characters as well as they should? All I know is that I'll be looking to replace my cancelled titles with something similar - if it's available.

Reviewed this week: Age of Ultron, Batgirl, Batwoman, He-Man and the Masters of the Universe, It Girl and the Atomics, Legion of Super-Heroes, Sesame Street, Sword of Sorcery, Ultimate Comics Spider-Man and Wonder Woman.

Wolverine and Sue Storm remain trapped in a vastly changed, dystopic reality where Hank Pym's death ultimately resulted in the near-destruction of the human race. This is a rather dull issue, all things considered, and it worries me that we're only two issues away from the end of this ten issue epic and I can't see how Bendis will draw it to a satisfactory conclusion. To be honest this issue and the last could have easily been squeezed into one issue. I was hoping this was finally going to be a Marvel Comics 'event' that worked, but at this stage I'm getting a little doubtful. (2/5)

The Ventriloquist gets re-envisaged for the New 52. I'm not sure I like it: Simone has made her a more effective character than Paul Dini did some years back, but it's still nowhere near as effective as the mousy, nervous male Ventriloquist of the 1990s. What I particularly miss is Scarface, the pre-New 52 dummy that made the character rather funny. The new dummy is nowhere near as charismatic, although I hold out hope that by the end of this storyline he might possibly get a Scarfacey makeover. This is a competent and enjoyable issue, particularly the first few pages as Simone goes to show just how traumatised Barbara is at the moment: it's the sort of attention to character that lifts this book up every month. Fernando Pasarin's artwork is solid and enjoyable. (3/5)

This issue feels like treading water. There's a lot of dialogue, a lot of moments to enhance the characters, but to be honest we're not seeing anything in those characters that we didn't already know. A large section of the book is taken up with a narrated flashback by Cameron Chase, which is an almost textbook method of making an action scene boring. This whole issue could be told in five pages or less. It will almost certain read well in the inevitable collected edition of Batwoman Volume 4, but as a single issue it's pretty poor value. This is the least interesting issue of Batwoman so far, and that makes me sad. (2/5)

He-Man and the Masters of the Universe #2

Just to get the bulk of this review out of the way, it's better than issue #1 but still isn't quite working for me. What I want to focus on is this: in one scene Teela explains at length how Mekanek is a silly character. His power is, after all, to extend his neck. This attitude irritated me. Here's why: Masters of the Universe is a fundamentally silly property. The characters all have powers based not on what would be cool for the narrative or useful on the battlefield, but rather on what would be a fun play action for a mid-1980s action figure. I used to own the Mekanek action figure, and in terms of play value he was pretty cool. But yes, in terms of a comic book narrative he's slightly silly. The problem comes when Keith Giffen has Teela not respect Mekanek's existence, because if the book's characters think everything is ridiculous and laughable, then why should the reader give a shit either? There's a fine line that needs to be walked with these sorts of nostalgia-infused toy tie-in comics, and Giffen failed to walk it. In the long run, that damages the book. (2/5)

It Girl and the Atomics #10

It Girl teams up with the Tweenage FBI after they steal an important invention from Flem's laboratory. This issue is pretty underwhelming. The simplified storylines and breezy tone only really work when they're matched with good artwork, and guest artist Natalie Nourigat simply didn't impress me all that much. It's not an issue of quality so much as a problem of the art not really matching the book. Still, it's fun and disposable entertainment - and there's nothing wrong with that. (2/5)

This week DC Comics confirmed that Legion of Super-Heroes has been cancelled, with August's issue #23 being the final instalment. This certainly gives the book an apocalyptic ending, since this issue - one of the best they've produced in ages - is pretty much wall-to-wall explosions and carnage. I hope - and expect - the cancellation leads to a revised, more openly engaging Legion book in the next few months. There's great potential here that never quite managed to get out of the gate. (3/5)

Yeah, you read that correctly: I'm reviewing a Sesame Street comic book. It's hard to believe that after more than 40 years on the air Sesame Street has never had its own comic before. This is a gem. It's a collection of short strips and stories featuring most of the Sesame gang, using beautiful and vibrant artwork and snappy, funny scripts. The main strip features Elmo attempting to become a superhero like Super Grover, and any comic that features Super Grover is fine by me. It's a really clever package, representing the very best of the television series and even including a first page that explains to small children how you read a comic book: that's an idea that goes beyond smart and into genius (actually you can read that page here). If you've got small children, or if you're a child at heart, this is so worth checking out - and kudos to independent publisher Ape Entertainment on getting the rights and treating the property with such respect. (5/5)

This is the final issue of Sword and Sorcery, and things come to a stirring climax as the heroes make their final stand against Eclipso. I've rather enjoyed this relaunch of Amethyst: Princess of Gemworld, but I think this book was doomed from the start: generic title, unnecessary backup strips and a $3.99 price point conspired to take it down. It's a shame - given time and a larger audience this could have been a sensational addition to the New 52 DC Universe. (3/5)

And with the magical words "One year later" Ultimate Comics Spider-Man heads into an all-new story arc. It was interesting reading this book just after reading Batwoman #20, because both books focus on conversation and character at the expense of superheroic action. The difference is that Bendis has written significantly more interesting conversations and characters. After the sucker-punch of last month's events, I think it was necessary to put a whole issue aside in order to unpack exactly how Miles' life has changed. I also adore the official introduction of teen Kate Bishop to the book: if you look through the back issues of this title you can see her in the back of the classroom making eyes at Miles for two years now. I'm happy to see she finally got her man. (5/5)

Have I mentioned how much I love that the god War in the comic is visually based on Brian Azzarello himself? It makes me laugh every time I see him. This issue chugs along in the same direction it's been headed for a long while: gods have conversations, gods threaten each other, and Wonder Woman has a knock-down fight in the streets of London. I'm still enjoying this book, but I do feel it's losing momentum badly. (3/5)

Winner of the Week: It's got to be Sesame Street.
Loser of the Week: Batwoman, and I feel really quite guilty writing that.
Posted by Grant at 6:11 PM