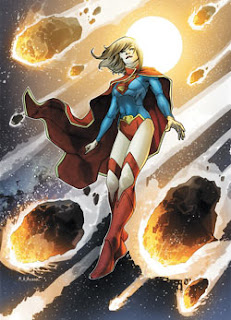 Oh Supergirl. She's such an awkward character for me. On one level I love the concept: give the powers of Superman to a teenage girl, who may be less secure in herself, or less mature, maybe more prone to make mistakes, and so on. On the other hand she is so prone to being depicted as an object of lust: a scantily clad bit of teenage eye candy generated entirely for a male gaze. This problem is, I think, a comparatively recent one, thanks to an ill-advised redesign by the late Michael Turner. It's dogged the character ever since, to the point where DC apparently got complaints when they stuck a pair of bike shorts under her miniskirt a few years ago.

So overwhelming has been my distaste for Supergirl's look in recent years that I originally bypassed the New 52 version completely. Most other books I gave at least a cursory look, whether it was buying the first issue or even flipping through a copy in the comic shop. Supergirl I just ignored. It wasn't a deliberate thing: I just realised when looking for the next New 52 series to review that I hadn't looked at this comic once. So I have purchased the first trade paperback, Supergirl Volume 1: Last Daughter of Krypton, and am pleased to report it was a very enjoyable book.

It does have some issues, of course. For one thing it's a very slow story, because it's dominated by large panels and splash pages. They make look cool, but they significantly reduce the amount of plot that you can squeeze into each issue. I read the entire six-issue arc within an hour or so. It's not such an issue when collected into a book, but issue by issue this comic would have been excruciating.

Then there's that damn costume.

It's a weird one, that's for sure. The top half of her costume seems okay: the standard blue leotard with long sleeves, Superman logo and cape, the high collar that appears to be obligatory for all New 52 superheroes. The bottom half is... I don't know where to start. The boots are weird, extending up onto her bare thighs but leaving sections cut out to reveal her knees. The leotard is insanely high cut, like a bad 1980s supermodel swimsuit, and covered by what I can only describe as 'groin armour'. It looks awkward and tacky, and something that I can't imagine any average teenager wearing without developing severe body image issues and anxiety. It's needlessly fetishistic, once again constructing the character (in visual terms) for a male gaze. It turns me off the rest of the book, which is a pity because asides from her look she's very well characterised. 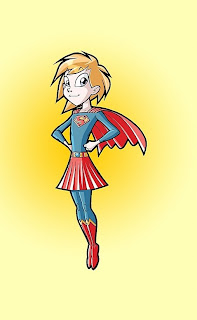 I think the best Supergirl ever presented was the one in Supergirl: Cosmic Adventures in the Eighth Grade (to the right), and if it had been me calling the shots at DC I would have looked at finding a way to bringing an element of that iteration to the New 52. If the strength of the character is giving Superman-level powers to a more inexperienced and younger person, then a 13 year-old Kara Zor-El would seem to be a stronger concept than a 17 year-old. But of course a 13 year-old can't be an easy lust object, so the older character remains.

The short answer is 'pretty well'. For the year leading up to the New 52, Supergirl sold an average of 22,000 copies, although sales were gradually declining and the last issue in August 2011 didn't manage to sell 20,000 copies. 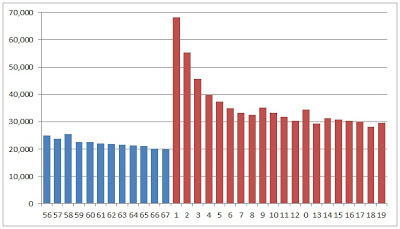 The book relaunched with issue #1 sales of 68,000, beating Superboy by about 5,000 copies. Sales dropped by about 19% with issue #2; this compares to a 23% drop for Action Comics, 20% for Superman and 19% for Superboy. After about six months the book settled down into the low 30,000s for the most part. In recent months it's dropped below the 30,000 mark but holds on at a relatively healthy 28,000 copies or so (still more than Superboy, which sits at around 24,000). If Supergirl can keep most of its current audience it should manage to stick around for years to come. I just really hope that they do something about that costume at some point.
Posted by Grant at 9:26 AM