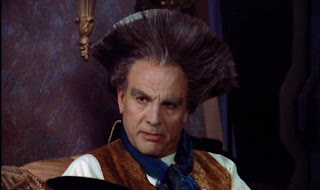 Sheridan goes down into the haunted Grey Sector of Babylon 5, and starts to suffer paranoid hallucinations as a result. An old friend of Ambassador Mollari's arrives with an important request - one that Londo may not be able to gr-zzzzzzzzzz...

Sorry, fell asleep there for a moment. This is what frustrated me about Babylon 5 the first time around: for every genuinely decent, gripping episode like "In the Shadow of Z'ha'dum", there's an inanely tedious and boring episode like "Knives". Sure, things happen in the episode. The problem is that they're presented in such a way that I genuinely don't care.

The episode is written by Lawrence G. DiTillo. His previous Babylon 5 scripts were "Born to the Purple", "Deathwalker", "Eyes", "TKO", "Spider in the Web" and "GROPOS". I have hated every single one. Consider this: I rated Babylon 5's first season as being 45% good. Take DiTillo's episodes out and the season suddenly becomes 56% good. This guy is actively dragging the quality of the series down.

So Londo has an old friend who's about to be accused of treason, only Londo can't help him because the man who's doing the accusing is his partner-in-crime Lord Refa. This leads to a sort of Roman Empire-style duel to the death so that his friend can die without his family also falling into shame and destitution. Also because who doesn't like watching two slightly overweight middle-aged men have at it in a poorly choreographed sword fight? At one point Londo even managed to drop a sword to his left and pick it up again from his right.

Sheridan meanwhile gets some kind of alien intelligence in his head causing hallucinations. It's one of those situations where the characters have to behave in willfully stupid and ignorant ways to avoid seeing there's something wrong, relieving the captain of his duties and finding out immediately what's happened to him. It feels like filler; something to pad out the running time of an episode where there's not enough of an A-plot to sustain 40 minutes.