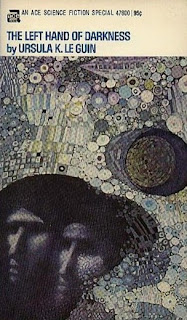 Books of May highlights books - both fiction and non-fiction - that have engaged, entertained or otherwise made a significant impact on me over the years. The goal is to highlight one book a day for the entire month. Today, book #6: The Left Hand of Darkness, by American author Ursula K. LeGuin.

On the distant planet of Gethen, a diplomat named Genly Ai negotiates with the Gethenians in an attempt to convince them to join the galaxy-wide civilization known as the Ekumen. When the political situation on Gethen suddenly shifts, Genly finds himself displaced in the freezing tundra with a betrayed prime minister and little hope of survival.


I was highly fortunate to be teaching a university course on science fiction when I first came to The Left Hand of Darkness, which meant that not only did I get to read an amazing science fiction but I was able to effectively get paid to read it too. Let's be honest, though, I would have read this for free. I always intended to get around to reading it, and when I did I discovered an eye-opening masterpiece of science fiction.
This is, despite its age (44 years old in 2013), an aggressively contemporary book. It is beautifully written, highly engaging and wonderfully evocative. It is also a remarkable experiment in the representation of gender, as the Gethenians are an androgynous race that can - and do - change their sex.

At its core are two vividly drawn characters: Genly and the deposed Gethenian Prime Minister Estraven. Since reading the novel I have never quite rid either character from my head. They're so realistically drawn that they linger in the mind.

There is also an astonishing amount of world-building going on. Gethen is unlike Earth in terms of gender, technology, culture, religion and politics. So unique are some of the concepts that LeGuin is forced to invent new words (like 'shifgrethor') to describe them. There is always a strong cohesion among these new ideas. They aren't just wonderfully inventive: they feel real as well.

It's often the case that I will finally get around to reading a so-called 'classic' and discover that it's dull, or tediously old-fashioned, or profound overrated. The Left Hand of Darkness isn't anything like that. It's one of the best novels I have ever read, the kind that makes you sit bolt upright and take notice of it, exclaim with surprise in the first breath and then recommend it to others in the next.