Who50: "The Deadly Assassin" 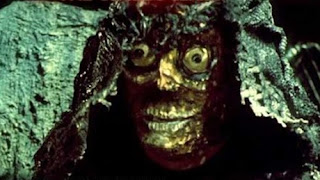 Who50 counts down to the 50th anniversary of Doctor Who by reviewing my favourite episodes and serials over the history of the programme, counting down from #50 to #1. Today, #26: "The Deadly Assassin", a 1976 four-part serial written by Robert Holmes and directed by David Maloney.

The Doctor is compelled to return to his home planet of Gallifrey when he receives a premonition of the Time Lord President's assassination. Instead of stopping the murder, the Doctor instead becomes the prime suspect: leading him into a confrontation with his oldest and most dangerous enemy the Master.

"The Deadly Assassin" is a striking four-part serial, releasing right in the middle of Doctor Who's 14th season. This season remains one of the most broadly and consistently acclaimed years of the series' entire 50 year history, juxtaposing Tom Baker's humorous portrayal with the darkest and most violent stories the series had ever generated. It was the first serial since the departure of Elizabeth Sladen as Sarah-Jane Smith, the longest-running companion the series had featured. Instead of replacing her, the decision was made to attempt a story in which the Doctor travelled on his own. It also featured the first-ever adventure set on the Doctor's home planet of Gallifrey, and was the first story to feature the Master since the death of Roger Delgado three years earlier.

This story was essentially the peak of a period of unprecedented violence in the series, confrontational enough that it generated considerable public debate. The prominent lobby group known as the National Viewers and Listener's Association, headed by Mrs Mary Whitehouse, used the cliffhanger ending of episode 3 as a prime example of how inappropriate for children Doctor Who had become and a Melvyn Bragg documentary produced that year discussed the impact of the violence extensively. This is, in context, a remarkably bleak Doctor Who serial. The Doctor doesn't have a companion to be funny at, giving the entire story a desperate, humourless air. It brings the Master back not as a witty, suave villain but as a desperate, insane cadaver, the flesh rotting from his face while he desperately fights for any chance of survival.

Perhaps the most remarkable aspect of "The Deadly Assassin" is how rigorously Holmes transforms the Time Lords. From their debut in "The War Games" up to this point they had been depicted as all-powerful, godlike characters, working in synch like some omniprescent and impassable force. Here they are re-imagined as a sort of political, bitterly conflicted conclave, full of rival houses and self-interested cardinals. It's all downhill for them as a civilization from this point. By "The Invasion of Time" they're being invaded twice in the same day. By "The Trial of a Time Lord" they're actively corrupt. By "The End of Time" they're war-mongering, genocidal maniacs. Perfection is rarely good for generating drama. Robert Holmes recognised this, and finally made the Time Lords interesting for the audience.

What always surprises me when I rewatch this serial is just how much of it is set inside the Matrix, a virtual reality created by the Time Lords that contains the sum total of their knowledge and experience. The Doctor enters this space to root out the Master's accomplice towards the end of episode 2, and doesn't emerge until some way into episode 4. This protracted fight inside the Matrix is a masterpiece of surreality, surpassed only by the Patrick Troughton story "The Mind Robber". Holmes would attempt a similar sequence in his final Doctor Who story, "The Ultimate Foe" (in 1986), but that second attempt is a pale imitation compared to what he does here.

This is such a striking Doctor Who story. It's striking because it's so unusual compared to the serials that came before and after it. It's striking because it established so much of the series' long-running traditions and mythos (Time Lord society is established here, the character Borusa will return three times between 1976 and 1983, Time Lord founder Rassilon is name-checked for the first time, the Master is established as a continuing enemy beyond the Pertwee era, and a limit of 12 regenerations per Time Lord is set).

Most importantly it's striking because it's a genuinely brilliant and suspenseful bit of television drama. It's not the best serial of Season 14 (I will be mentioning another three serials from this season in coming instalments), but it is a key example on why that season is so enormous - and rightfully - beloved by its fans.
Posted by Grant at 8:56 AM