Like The Fast and the Furious? Watch Young and Dangerous. 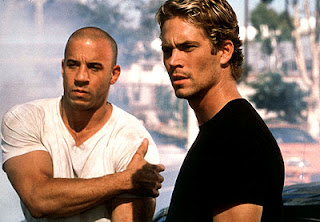 I've never really quite gelled with The Fast and the Furious. I saw the original film and was pretty underwhelmed: it was basically a car-centered remake of Point Break - only with less charismatic actors (Paul Walker is no Keanu Reeves, and Vin Diesel is no Patrick Swayze). The sequel, amusingly titled 2 Fast 2 Furious, was actively awful, and to be honest the franchise lost me from there. I did try watching Fast & Furious 5, but completely failed to engage with the characters or the plot and stopped watching halfway through.

Despite my own opinions, it's a crazy popular franchise. The sixth installment just broke the all-time record for a Universal Pictures opening worldwide, and a seventh is already in active pre-production. It feels odd for a movie franchise. They're churning the sequels out at an alarming rate. These days you expect there to be a 3-5 year gap between installments, but we've got a sixth film coming only two years after the fifth, which itself came only two years after the fourth, and the seventh is coming out in 2014. Something about that clicked with me; I suddenly recognised the franchise from somewhere else. This afternoon I saw an advertisement for Fast & Furious 6 on the side of a passing bus, and it suddenly occured to me.

The Fast and the Furious is America's Young and Dangerous.

If you're a fan of The Fast and the Furious and you haven't experienced Young and Dangerous, I suspect you're in for a treat. All of the same elements are there: continuing and overwrought  storylines, smooth and stylised photography, the glamourisation of illegal activity and criminals, and a vast array of very pretty male action stars.

The saga begins in 1995's Young and Dangerous, in which a group of Hong Kong teens slowly rise up the ranks of their local triad branch. The film stars Jordan Chan and Ekin Cheng, a man with hair so pretty that it deserves its own on-screen credit. It was directed by Andrew Lau, a visually stylish director who would go on to apply his considerable talents to Storm Riders, Confession of Pain, Legend of the Fist and Infernal Affairs (upon which Scorsese based his Oscar-winning film The Departed).

Lau managed to direct not one but two Young and Dangerous sequels in 1996, pushing Chan and Cheng's characters to new heights, with each film earning enormous piles of cash and sparking considerable controversy in Hong Kong over how it made the triads looks so cool and appealing to local teenagers. A fourth film was released in 1997 and a fifth in 1998, with a final climactic episode titled Born to be King winding up the series in 2000. Of course there were also six spin-offs, including Young and Dangerous: The Prequel, Once Upon a Time in Triad Society and the rather excellent Portland Street Blues. This year there was even a reboot, starting the franchise off all over again with new actors.

These are not exceptionally good movies, but they are exceptionally fun movies. The continuing saga drags you in like a well-written soap opera, and the regular bursts of street violence keeps things moving along in an exciting and dramatic fashion. Like The Fast and the Furious, they're fast, ridiculous and filled with pretty leading men - but in the case of Young and Dangerous I personally think the men are slightly prettier and definitely much more charismatic.

It's quite difficult to track the Young and Dangerous movies down nowadays, but if you've never seen them keep an eye out: they're definitely worth tracking down for all fans of trashy, over-the-top melodrama. And cool hair.
Posted by Grant at 5:02 PM