Books of May: All Tomorrow's Parties, by William Gibson (1999) 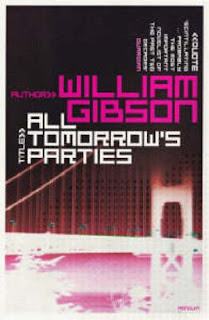 Books of May highlights books - both fiction and non-fiction - that have engaged, entertained or otherwise made a significant impact on me over the years. The goal is to highlight one book a day for the entire month. Today, book #7: All Tomorrow's Parties, by Canadian author William Gibson.

William Gibson is probably the most famous science fiction author of the 1980s. His debut novel Neuromancer crystallized the cyberpunk genre and helped influence an entire generation of science fiction writers and filmmakers. His novel The Difference Engine, co-authored with Bruce Sterling, helped to prefigure the current craze for steampunk. Pretty much all of his other books have been hailed as classics of their genre: Count Zero, Mona Lisa Overdrive, Spook County and others.

All Tomorrow's Parties (the title is lifted from a Velvet Underground song) is the third part of a trilogy, and was preceded by Virtual Light and Idoru. While all three novels are incredibly good, for some reason it is this third novel that has made the greatest impact on me. It may not be the best William Gibson novel - that's probably wide open to extensive debate - but it's definitely my favourite.

There's a shift in this book, and its predecessors, from Gibson's earlier cyberpunk novels. Big multinational corporations aren't really the enemy any more, so much as the media are. This cements the book as a late-1990s exercise, and helps give this trilogy a freshness. It would have been easy to write more cyberpunk: Gibson doesn't. He takes his fiction another step forward into something not as easily defined, but equally as impressive.


Gibson is so talented at creating these kinds of near-future worlds. He is clearly a voracious researcher, picking up all manner of technological and cultural advances from around the globe and managing to work out what they'll be like in ten or fifteen years' time. He's not necessarily a visionary (Neuromancer, for example, completely fails to predict the mobile telephone) but he creates believable futures that speak to the time in which his books are published.

This novel begins and ends in media res. I don't think it has a typically identifiable opening or conclusion. The reader simply jumps in with events already in motion, and then jumps out again after 300 or so pages. What you get here, then, is not really a self-contained three-act narrative. The book simply isn't structured like that. What I think you get instead is one of the most perfectly realised experiences in science fiction. Gibson drags us into a near-future, post-cyberpunk world, shows us around, and then sends us back home to reality. It's one hell of a trip, and one that has stuck with me ever since.
Posted by Grant at 9:09 AM