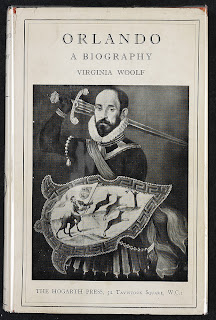 Books of May highlights books - both fiction and non-fiction - that have engaged, entertained or otherwise made a significant impact on me over the years. The goal is to highlight one book a day for the entire month. Today, book #3: Orlando, by English author Virginia Woolf.

Orlando, a young man in the court of Queen Elizabeth I, lives for more than 400 years and changes sex along the way. That's pretty much the one-sentence premise of Virginia Woolf's Orlando, and it's pretty much my favourite fantasy novel.

Not that you'll find it in the fantasy section of your local bookshop, of course. Since it was written by one of the great authors of 20th century literature, you'll have to go find a copy in either the classics or the literature section. It's both a classic and literature, of course, but first and foremost for me it's also a profoundly effective fantasy.

The book's full title is actually Orlando: a Biography, and it was written as a sort of semi-biographical tribute to Woolf's lover Vita Sackville-West. At this point I have to be honest and admit that, while the book is a highly significant one in terms of the portrayal of gender and is a milestone in the history of women's writing and feminism, my main reason for liking Orlando is that it's simply a really entertaining novel. We often lose that with significant works. We get so obsessed with a classic's reputation and influence that we often forget to sit back, forget its cultural impact and just read the damn book.

I actually came to Orlando via Sally Potter's outstanding feature film which starred Tilda Swinton in the title role. It remains one of my favourite films, and it prompted me to finally go and read a Virginia Woolf novel for the first time. Lo and behold, the film was such a strong adaptation of the novel that I wound up liking the novel for pretty much the same reasons.

Allow me to offend generations of literati by describing Orlando as "Highlander for smart people". One of the reasons I continue to adore the Highlander franchise despite a continuing cavalcade of shit movies, TV shows and cartoons is that I love the whole 'ancient mariner' vibe of a centuries-old immortal, having to live through one period after another, constantly meeting new people only to inevitably lose them. Orlando is, for me, all the stuff I love about Highlander only without the tedious shouting and swordfighting.

Orlando is just such a wonderful character. In many ways I kind of wish her story could continue past the 1920s and into the 21st century, because I think she would be very happy here.
Posted by Grant at 10:37 AM