Doctor Who: "The Crimson Horror" 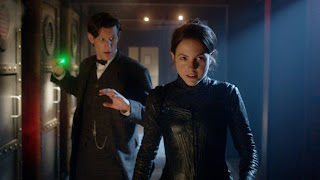 1893. Madame Vastra, the "Great Detective", is drawn to Northern England when the eyes of a corpse appear to reveal the image of the Doctor in them. What is "the Crimson Horror"? What diabolical plans does Mrs Gillyflower and the elusive Mr Sweet have for the future of the human race? And where on Earth is the Doctor?

Something unexpected happened to me during the climax of "The Crimson Horror": I stopped caring. I suddenly realised that I was not even slightly invested in the action, and didn't have any curiosity as to what was going on or how the adventure would be resolved. Now obviously all Doctor Who is essentially a confection: we generally know how it will end, and we know good will triumph and the villain will be defeated. The quality of the series comes from how it is written and presented to temporarily fool us into thinking something else might happen, or to confound us with not working out how the Doctor will win the day in the end.

Gatiss simply doesn't seem capable of doing that. A quick glance over his previous Doctor Who scripts reveals the same problems that lie in "The Crimson Horror". He is a gifted sketch writer, as borne out by his sterling work in The League of Gentlemen. I don't think he has a gift for stringing those sketches together into a sensible plot, and that's what his Doctor Who scripts feel like: a string of sketches, each informed by an encyclopedic knowledge of science fiction and horror, and Doctor Who's own history. He can recognise why each individual element of an episode works, but he can't string them together in any interesting fashion. As a result you always get brilliant concepts from a Mark Gatiss episode (Charles Dickens versus alien ghosts, an Ice warrior loose on a submarine), but without exception each time they feel two-dimensional and cliched.

There are many good bits in "The Crimson Horror". I continue to adore Madame Vastra and Jenny, and firmly believe The Great Detective deserves to be Doctor Who's next spin-off (or for Jenny to become a companion). Diana Rigg and her daughter Rachael Stirling both deliver exceptional performances. The 19th century setting and vaguely steampunk-like technology both suit the series incredibly well. The episode itself is utterly boring and eminently missable. Two bad episodes this season (out of 12 so far), which is actually a pretty good batting average when you think about it. The problem is that both of the poor episodes were written by Mark Gatiss. I've heard fans barrack for Gatiss to become the series' next showrunner once Steven Moffat moves on. Based on his scripts, I actually hope Gatiss doesn't get the job.

This was the 100th episode of Doctor Who since it returned to TV screens in 2005. I kind of wish they had celebrated the milestone with something more impressive.