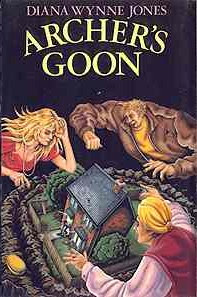 Books of May highlights books - both fiction and non-fiction - that have engaged, entertained or otherwise made a significant impact on me over the years. The goal is to highlight one book a day for the entire month. Today, book #8: Archer's Goon, by English author Diana Wynne Jones.

Diana Wynne Jones cast a long shadow over the landscape of children's fiction, and is rightfully held up as one of the giants of English language fantasy. I wasn't certain which of her books I wanted to mention in this series, but in the end I went for Archer's Goon. I don't think it's as well known as some of her more famous novels - Howl's Moving Castle being a key example - but for whatever reason it's a book that stuck in my head, and one that immediately came to mind.

The novel follows thirteen year-old Howard Sykes, whose father is an author. One day a huge thug arrives at the house to collect two thousand words that Howard's father apparently promised to write for somebody named Archer. Hijinks ensue, as they say, and before long Howard is off on an adventure involving town secrets, magic, time travel and more. It's a wonderfully off-the-wall sort of a book.

I like that children's literature is particularly adept at this sort of strange narrative. It feels like there are fewer rules or constrictions on what an author can devise, because a child is far more able to simply accept weird events, blendings of genre and the like, than an adult reader would. There's a sense of glee about the book. It's extraordinary fun, and is an excellent read even when you're not a child any more.

This novel was adapted by the BBC in 1992 as a fairly decent six-part series. It's notable for being the final drama production of the BBC's in-house children's department: from this point on all children's shows were either produced by external companies, BBC drama or BBC regional centres (such as BBC Wales and The Sarah Jane Adventures).
Posted by Grant at 11:02 PM