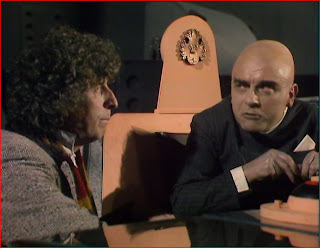 Who50 counts down to the 50th anniversary of Doctor Who by reviewing my favourite episodes and serials over the history of the programme, counting down from #50 to #1. Today, #34: "The Sun Makers", a six-part 1977 serial written by Robert Holmes and directed by Pennant Roberts.

The Doctor, Leela and K9 arrive on the planet Pluto where - much to the Doctor's surprise - the human race lives inside a planet-sized industrial city warmed by a series of artificial suns. Humanity is overtaxed and enslaved by the Gatherer and his master, the mysterious Collector. Naturally it's up to the Doctor and Leela to lead the revolt and overthrow their tyrannical rule.

The popular story goes that former script editor and long-time script writer Robert Holmes wrote this serial in response to an unpleasant experience being audited by Inland Revenue. "The Sun Makers" is a tremendous satire, in which the masses are overtaxed to the point of destitution while a corporatised elite government rules over them in the lap of luxury. It has places named after British taxation forms and a villain styled on Britain's Chancellor of the Exchequer.

It's not just a great satire, however: I personally think it's one of the best Doctor Who serials of the 1970s.

A quick bit of background, even though I'm likely telling you something you already know: under its previous producer Philip Hinchcliffe Doctor Who had become progressively darker and more violent, leading to a crisis point in 1976 when the series became so violent that it actually started courting controversy. The National Viewers and Listeners Association (NVLA), a community lobby group led by Mary Whitehouse, challenged the BBC quite strenuously (and effectively) over the violent content in what was ostensibly a children's drama. As a result Hinchcliffe was moved off to new projects and the series was taken over by new producer Graham Williams. Williams' brief was simple: less violence, less horror, more comedy.

This new direction for Doctor Who faltered a bit over the course of Season 15. "Horror of Fang Rock" and "Image of the Fendahl" were effectively holdovers from Season 14, containing much the same style of horror that the BBC's management were keen to phase out. Other serials such as "The Invisible Enemy" and "Underworld" were relatively dire science fiction efforts. In the middle sits "The Sun Makers", the season's one bona fide classic. It's funny, as well as occasionally horrific. It's well cast, and resoundingly well performed. Comedy and science fiction are curious bed-fellows, and when Doctor Who attempts it the results are more often misses than hits. Here, however, Holmes, Williams and director Pennant Roberts crack it out of the ballpark.

The funny bits of "The Sun Makers" are pretty well known to Doctor Who fans; it's the violence that fascinates me. Despite an order to reduce the violence and horror of the series, and despite "The Sun Makers" being widely perceived as one of "the funny ones", there's a surprising amount of nasty stuff going on here. Leela comes very close to being executed by scalding, with microphones wired to relay her screams to the Collector for his own entertainment. The Gatherer is violently thrown off the top of a building by a swell of rioting workers. It's quite amusing that, at the height of the Cold War, the Doctor is on British television leading a proletarian revolt against a capitalist nightmare. What on Earth would Mrs. Whitehouse say if she'd noticed?
Posted by Grant at 9:50 AM