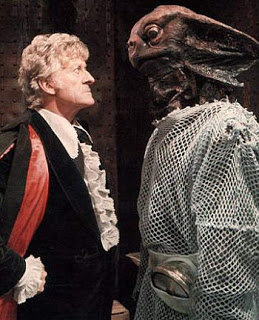 Who50 counts down to the 50th anniversary of Doctor Who by reviewing my favourite episodes and serials over the history of the programme, counting down from #50 to #1. Today, #35: "The Sea Devils", a six-part 1972 serial written by Brian Hayles and directed by Michael E. Briant.

When the Doctor and Jo travel to an island prison to visit the incarcerated Master, the Doctor cannot resist investigating a string of vanishing ships in the area. He discovers a colony of aquatic reptiles - sea-faring cousins of the Silurians he encountered two years earlier. Can he negotiate the peace he failed to secure last time - or are the humans and the Sea Devils destined for conflict?

"The Sea Devils" is the perfect sort of sequel. It provides the elements that made "Doctor Who and the Silurians" so successful - humanoid reptiles, a struggle for peace, the Doctor caught in the middle - and adds a significant boost of action and adventure. It gives audiences what they expect from a sequel, and mixes in so much more. The result is a gripping and massively enjoyable six-episode romp that's among the best serials the Pertwee era produced.

The Master is a tremendous addition to the mix. Roger Delgado and Jon Pertwee always shared a tremendous amount of chemistry, but they're particularly on fire here. There's such a wonderful sense of play in evidence: I've always observed that the Master seems to work best when his madcap schemes seem not intended to take over the galaxy, but rather simply to wind the Doctor up. His presence helps to ensure that the story doesn't simply rehash "The Silurians", but instead is something a bit more complex.

The Sea Devils themselves are brilliantly realised. For one thing they're a Doctor Who monster that runs - something sadly lost in their 1984 sequel "Warriors of the Deep". If there's one rule about Doctor Who's rubber-suit monsters is that they shamble threateningly: they're not supposed to sprint like a mad thing up the beach. That sort of thing simply isn't done, and it gives them a sense of menace the land-based Silurians lacked. Their emergence from the ocean brings an iconic moment to the series, so iconic in fact that the series wound up repeating the exercise twice in later years (in "Full Circle" and "The Curse of Fenric").

UNIT may be absent from this story, but the Doctor does get the assistance of the Royal Navy, and the real-life Navy enthusiastically supported this serial's production. It gives the serial a remarkable boost, providing infrastructure and footage far beyond the show's meagre production budget. This is in essence the closest classic Who got to producing a Hollywood-style action film, and it's all the better for it.

The Sea Devils are yet to return to Doctor Who. I really do hope they turn up sooner or later: they're a fantastic monster and deserve a shot at terrorising young viewers again.
Posted by Grant at 10:08 AM