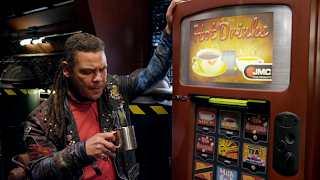 I have been remiss in my Red Dwarf reviews. Season 10 is done and gone, and yet I still haven't reviewed the final two episodes. Let's redress that now with a look at the season's fifth episode, "Dear Dave". Lister is increasingly depressed about his life as the last human being alive. He's going stir-crazy, sulking on couches and flirting with vending machines. When a post pod arrives, Lister discovers that an ex-girlfriend - now dead for millions of years - may have had Lister's son without his knowledge.

This is a very mixed episode, combining the sort of comedy that made Red Dwarf so good in the old days with scenes that are just painful to watch. Lister falling over a vending machine and looking like he's having sex with it would have been tedious 30 years ago. In 2012, when this episode aired, it was just dreadful. As a result this is the most uneven episode of the season so far.

There are some outstanding highlights. The Cat (Danny John-Jules) gets a wonderful scene playing charades - I'm really impressed with how well written the Cat has been this season. He was originally my favourite Red Dwarf character, but from Season 3 onwards he was progressively made less and less a humanoid cat and more and more a vain fashion plate with no strong personality and a string of catchphrases instead of actual jokes. If nothing else, Red Dwarf X has completely redeemed this character, and for that I'm very happy.

It is also genuinely funny to see a vending machine call Lister out on chatting it up. The joke may get dragged way too far as the episode progresses, but for a while it works very well.

So despite some serious missteps, I think this episode is well worth watching. It gets a tick of approval, leaving Red Dwarf X with four good episodes out of five - a running score of 80%, with one episode to go.
Posted by Grant at 5:02 PM