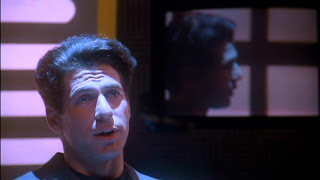 Three years ago John Sheridan's wife Anna perished in an explosion on the exploration ship Icarus, while investigating a dead civilization on a faraway world. The explosion left no survivors - until today, when Garibaldi identifies one of the apparent dead as Londo Mollari's mysterious associate Mr Morden. Putting Morden under illegal detention, Sheridan sets his career, his colleagues and his friends at risk in an attempt to get some answers.

"In the Shadow of Z'ha'dum" is, I think, the first episode of Babylon 5 in which every member of the cast and crew has brought their absolute A-game to the proceedings. It is a stunning hour of television. It's clever, surprising, heartfelt, revelatory and incredibly tense. It is an episode that pulls together a set of hanging threads from the first season and a half of the series, and weaves them into a more strongly defined direction.

First of all, I want to note what an outstanding twist it is that Morden was among the crew of the Icarus. Until this episode Sheridan and Morden have had nothing to do with each other, and in one masterstroke their fates are entwined. Interrogation scenes are a godsend for dramatic writers, and Straczynski makes the most of his opportunities here.

Morden's best scene, however, comes not in an interrogation with Sheridan, but in a cafe with Vir. The scene is a fan favourite: Morden asks Vir what he wants, and Vir replies that he wants "to live just long enough to be there when they cut off your head and stick it on a pike as a warning to the next ten generations that some favors come with too high a price. I would look up at your lifeless eyes and wave... like this." It's a great moment for Vir - the best he's had in the series so far. He is Londo's Jiminy Cricket figure, but for the first time he steps out and faces his enemy head-on. Plus his little finger wave is adorable.

This episode really presents Bruce Boxleitner with his first real opportunity to act, and act he does. He's frustrated, angry, tormented and driven. He finally gets some answers out of Delenn and Kosh at what the hell has been going on, and their answers actually satisfy a lot of questions the audience would have had at the time. The scene in which Delenn and Kosh reveal the truth of the Shadows to Sheridan is a little clunky, but this kind of info-dump is very hard to do. Sometimes you do just have to hold your breath and run headlong to the other side. Of course now is as good a place as any to note Straczynski's continuing cribbing from Tolkien's The Lord of the Rings. We've already been introduced to the Rangers; now we're introduced to an ancient, all-powerful evil that has ominously returned to its old place of power. Next you'll likely notice that Z'ha'dum sounds suspiciously like Kha'za'dum, and start wondering how long it is until a major character plummets to their death down an enormous pit there, only to return "Gandalf the White" style to help save the day.

Even while the bulk of the episode is devoted to Sheridan's pursuit of the truth, Straczynski finds time to further the Earth Alliance story arc with the introduction of the Ministry of Peace and the disturbing "Nightwatch". The Ministry's name is a nice Nineteen Eighty-Four reference, while the symbolism of the black armbands are pretty obvious to anyone - except, weirdly, the cast of the show.

This is an episode filled with foreshadowing and set-ups for later. Dr Franklin is overrun treating wounded Narns, and is taking stimulants to stay awake. Lt Zack Allen has joined the Earth Alliance's new "Nightwatch" because he sees it as free money with no repercussions. Kosh reveals he cannot leave his encounter suit because he would be recognised by "everybody". Most troubling of all, Kosh assures Sheridan in no uncertain terms: "if you go to Z'ha'dum, you will die."

This is the best episode of Babylon 5 so far. It's also the 10th good episode this season out of sixteen, leaving us with a season total of 63%.
Posted by Grant at 7:29 PM