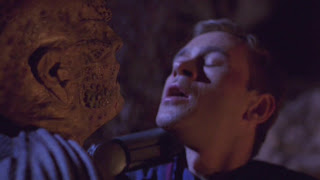 Trip's shuttle is shot down while exploring a new system - and when his mysterious assailant has to make a crash landing, both human and alien must put aside their differences to survive. Time is running out, however, as when dawn comes the planet's surface temperature will kill them both.

"Dawn" is Enterprise meets Enemy Mine, or perhaps a re-envisaging of the classic Star Trek: The Next Generation episode "Darmok". Two people - one a Starfleet officer, the other an alien soldier - have crashed on the same planet, and must overcome mistrust and an inability to speak each other's language in order to survive and be rescued.

What I'm getting at is that this isn't a highly original episode. On the other hand, it is an excellent execution of those older ideas. Something I've grown to appreciate in Enterprise is how their universal translators - a hand-waving bit of technobabble in earlier Star Treks - are not as widely used or available. If you don't carry a little portable device with you, then you're going to be relying on mime to get your point across.

This is a very well acted episode. Connor Trinneer has such an appealing presence, and this episode gives him a lot of opportunities for comedy and drama. His co-star is Gregg Henry, who does a wonderful job of portraying a genuinely alien non-human. He has weird tics and manners of speech. His species is depicted as highly isolationist, bordering on zenophobic - and its a testament to the script that by the episode's end he remains highly isolationist. People don't simply change their world view overnight, and it's nice that this episode for once acknowledges this.

The script is by John Shiban, better known for a string of great episodes in The X Files. He wrote the Enterprise episode "Minefield" earlier in Season 2, and like this it was a great, well-paced two-hander. Roxann Dawson (aka Voyager's B'Elanna Torres) directs, and she does a pretty good job of making the standard "planet hell" soundstage look and feel like an actual planet's surface.

Another fine episode of Enterprise. That brings the Season 2 tally up to eight good episodes out of 13. We're halfway through this season, and the current score is 62%.
Posted by Grant at 9:06 AM