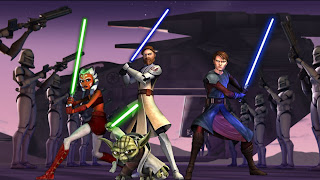 Walt Disney have confirmed via the official Star Wars website that Lucasfilm's range of animated programmes is undergoing a shake-up. In short:
None of these announcements surprise me, but let's take each of the three points in turn.

First up: The Clone Wars. It was always pretty likely that Disney would pull the plug on The Clone Wars as soon as it was feasible. The series airs on the Cartoon Network, a Warner Bros subsidiary, and when you have just dropped four billion dollars on an IP investment it makes little sense to then broadcast your IP on a rival network. As for new story arcs, I suspect a limited number of final episodes are going to go direct to DVD and Blu-ray. The cancellation of The Clone Wars is hardly a tragedy: it has run for more than 100 episodes and an intergalactic war can only run for so long before it gets tedious. Its cancellation also allows Disney to neatly close the book on the post-1999 prequels era and focus on the future of Star Wars rather than its past.

Secondly: Detours. A preview video of this was screened at the Celebration VI convention and released on the Internet. I'm guessing a quick Youtube search will track it down for you. Have no doubt, this is a mercy killing: I have rarely seen a cartoon that is as visibly and resoundingly unfunny as Detours was. I imagine Disney executives screamed in terror when they saw this monstrosity, and probably only calmed down when they realised there was still time to slam the brakes on this turkey.

Finally, a new animated series. It's actually hard to guess where Disney will go with this. I personally doubt they'll set it after the original trilogy because that would tread on the upcoming Episode VII from J.J. Abrams. The prequels era is pretty mined out. I'd actually expect to see them do some kind of Old Republic television series for Disney XD.
Posted by Grant at 10:05 AM