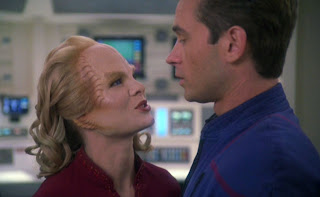 At an interplanetary medical conference, Dr Phlox surreptitiously attempts to get more data on P'Nar syndrome, drawing the suspicions of the attending Vulcan scientists and outing Subcommander T'Pol. Social prejudice among Vulcans for sufferers of the syndrome means that T'Pol's career is effectively over - unless Captain Archer can intervene. Meanwhile Phlox's second wife visits the Enterprise to install a new microscope.

This episode was produced at the behest of Viacom, who dictated that all TV programs in the 2002-03 season must in some way address HIV/AIDS, as a sort of public service announcement. "Stigma" is Enterprise's effort, a vaguely offensive story where only members of a small minority are susceptible to a fatal disease and where Archer can moralise at the Vulcans about their odd prejudice.

This episode simply doesn't work for me, and it's for a variety of reasons. Let's go through them one by one.

First of all: the main storyline about P'Nar syndrome. HIV/AIDS is a virus that can affect anyone, and which can be transmitted by any exchange of body fluids. Isaac Asimov contracted it from a blood transfusion. By making the disease something that you can only get by one outlawed behaviour among Vulcans, Enterprise perpetuates the myth - via thinly veiled allegory - that HIV/AIDS remains a "gay man's disease". The fact that T'Pol only has the syndrome because of a psychic assault (itself a rape analog) makes this seem every more distasteful to me.

Secondly: the idea of Vulcans being bigots flies against everything that Star Trek has presented before, and it simply doesn't fit very well. I was able to accept Enterprise's conjecture that early Vulcans were a bit dismissive and judgmental of humans and their emotions, but actually advocating the death of an entire subculture among their population is not a Vulcan thing to do. It chafes badly against decades of Star Trek lore, and makes the episode a difficult pill to swallow.

Finally there's the comedic subplot involving Phlox's wife. I like that Denobulan culture is polyamorous: it's an interesting narrative to follow, and as their culture clearly normalises complex interrelated networks of romantic and sexual partners it's bold territory for the series to explore. Sadly this episode seems to make their behaviour seem slightly immoral, or at least actively odd. For a series that used to be at the forefront of tackling social issues in America, this seems almost as backwards as the central plot.

So this episode gets a "no" from me. That leaves Enterprise Season 2 with eight good episodes out of 14, and a season score of 57%.
Posted by Grant at 9:27 AM