Judging the New 52: I, Vampire 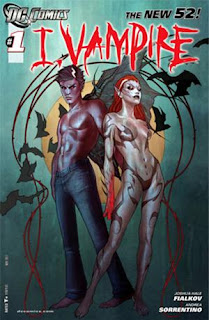 I, Vampire was originally one of several strips in the DC book House of Mystery. It was written by J.M DeMatteis and ran from 1981 to 1983. Never averse to regurgitating old titles for new audiences, DC elected to revive the series as part of the New 52 relaunch. The new version was written by Joshua Hale Fialkov and pencilled by Andrea Sorrentino. I hadn't heard of I, Vampire before. I hadn't read anything by Fialkov or Sorrentino that I could recall. There were 51 other comic books launching that month, and I am really, really sick to death of vampires. So I skipped it, and to be honest pretty much ignored it entirely. When it was announced that I, Vampire was ending at issue #19 I didn't even pause to think about it. Then I found a copy of the first trade paperback on sale, figured "oh what the hell" and picked it up to see what I was missing.

Based on the first six issues, I was missing one of the best comics of the New 52.

There's not a lot here that's particularly original, but what is here is tight plotting, strong characterisation and wonderfully evocative artwork. It feels like it should be a DC Vertigo title, indeed it's not far into the series when John Constantine pops up - albeit the New 52 version who says things like "bleeding 'eck" and doesn't smoke or drink as much. It also contains a nice guest appearance by Batman, which they probably should have highlighted a bit more - he tends to sell fairly well. 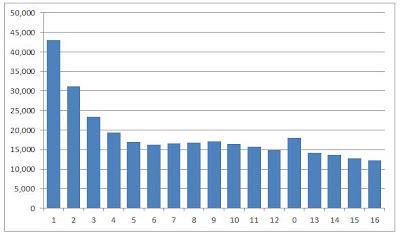 If we look at the sales there's something fairly interesting going on. There is a very steep slide over the first five months: down from 43,000 units to a shade under 17,000. Then the book, which has been receiving pretty stellar reviews over the course of its run, actually begins to slowly pick up readers. It's a slow increase from issue #6 to issue #9, but the increase is there: up about 5% over those four issues. This increase is likely due to a Justice League Dark crossover during issues #7 and #8. Sadly the growth doesn't continue - aside from the now-expected bump with issue #0 in September 2012, the sales of I, Vampire have been slowly leaking. By this January (issue #16) the book was only shifting an estimated 12,300 copies.

Some industry observers suggested that I, Vampire might be saved the axe due to trade paperback sales. While bookstore sales aren't available, we can see that only 2,586 copies of the first volume were shipped by Diamond Distribution to the comic shop market in the USA, UK and Australia. That's less copies than Green Arrow, Justice League International, All-Star Western and Green Lantern: New Guardians.

Thankfully DC gave Fialkov plenty of notice that they were pulling the plug on his book. This means I, Vampire should receive a proper conclusion and will, down the road, be a great three volume horror comic for future readers to enjoy. Fialkov is certainly landing on his feet, having been picked to replace Geoff Johns at the head of the lucrative Green Lantern franchise.

Sometimes a comic fails because it's simply awful, or redundant, or saddled with poor writing or bad art. Sometimes a comic fails because there's simply no market for it, or its publisher simply fails to find it. I, Vampire is definitely in the latter category - it's a shame it never found its audience, but at least through trade paperbacks readers will have a chance to catch up and enjoy what they did.
Posted by Grant at 9:41 AM