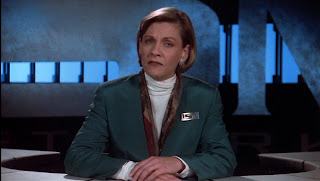 A television news crew spends 36 hours onboard Babylon 5, as the Centauri-Narn War heats up and humans back on Earth start to question whether the Babylon Project is a waste of public money.

This is one of the most acclaimed episodes of Babylon 5, and rightfully so. It takes an under-used dramatic technique - framing the narrative inside a fictional news broadcast - and applies it to a science fiction setting. The result is something that science fiction audiences have never seen before. It's a regularly funny episode, because we can all recognise the tropes and techniques of commercial television news, and it's also a surprisingly dramatic one, because J. Michael Straczynski uses the cover of a news broadcast to explore much of the changing environment within which the series is set.

I'm very quick to criticise Mr Straczynski when his writing is under-par. Let me be equally quick to praise "And Now For a Word". It is a stunning piece of television drama of which he - and his production team - should be most proud.
The fake news broadcast is not an idea that Straczynski has invented. It was used very successful in Larry Gelbart's M*A*S*H, and before that by Peter Watkins in his stunning docu-drama Culloden. This is, as far as I'm aware, the first time it was used in a science fiction context, pre-dating Paul Verhoeven's Starship Troopers by a year or so (and in this case only a select few moments of the narrative were represented as news).

It's great to see the Centauri-Narn War placed front-and-centre again. I really do feel like this season has dropped the ball in regards to this conflict. A lot was made of the outbreak of war, and then we've only seen its effects in fits and starts ever since. Here we learn just how dire the situation is becoming for the Narn, and just what it is they are afraid of, as 100 years of torture, murder and enslavement is revealed through backstory of the original occupation.

The episode also provides a lot of information on how Earth is changing. There's a wonderfully upbeat advertisement halfway through for the Psicorps, including a blink-and-you'll-miss-it subliminal message. There are mentions dropped in of a range of new government departments and ministries, including the Office for Public Information and the Ministry of Public Morale. Things are getting rather Orwellian down on Earth, it seems.

There are many highlights for the cast: Ivanova's awkward TV interview, Delenn breaking down when challenged about her transformation into a human-like form, G'Kar's bottled anguish and Londo's magnanimous, deeply insincere sound bytes. Most of all, by showing us the station and its characters from an external, slightly removed perspective, we get a stronger appreciation of just how important they all are.

Big stamp of approval from me: this leaves Season 2 with nine good episodes out of 15, and a rolling score of 60%.
Posted by Grant at 3:26 PM