Game of Thrones: "The North Remembers" 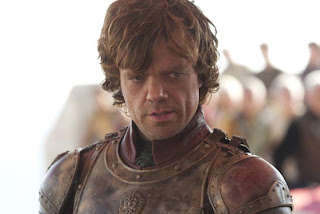 Most TV dramas I watch once they're released on home video. Commercials in broadcast television annoy me too much (particularly Australian TV's habit of editing two minutes from American dramas to squeeze in extra advertisements), and generally speaking I'd rather wait and pay money to a show's producers than pirate my TV via torrents. As a result I'm often quite behind on my television. A case in point: HBO's marvellous epic Game of Thrones. Everybody else is gearing up for the Season 3 premiere at the end of the month, while I am only now wading my way through Season 2 on Blu-ray.

Diving into Season 2 of Game of Thrones a year after watching Season 1 is very much a case of running to catch up. This show's cast is massive, sprawling across an entire fictional continent and in many cases almost entirely unrelated to one another. A lot of my time was spent straining to remember which supporting character was which, what their agendas were, and who all the new people were too.

As with all of my TV reviews, the section above the cut may provide a brief general synopsis of the episode while anything below the cut may spoil significant portions of the episode.
So, to broadly recap: by the end of Season 1 the Kingdom of Westeros was in turmoil. The king, Robert Baratheon, was dead. His widow, Queen Cerce Lannister, now rules as Regent along with her son King Joffrey. Joffrey is the product of incest between Cerce and her brother Jaime. This incest was discovered by Ned Stark, the "King's Hand", and as a result Cerce had him imprisoned for treason and young Joffrey had him executed.

Two of Robert Baratheon's brothers are now claiming the throne of Westeros. Ned's son Robb Stark has proclaimed himself King of the North, and is marching his army towards King's Landing and the ruling Lannister family. On another continent altogether, Daenerys Targaryen - the heir to the original king that Robert Baratheon deposed - is crossing the desert with the remains of her army and three baby dragons (a species long thought extinct). So that's four claimants to the throne, including current King Joffrey, and a fifth king who just wants Joffrey dead for murdering his father. Meanwhile, north of all of this, an ancient evil appears to be stirring in the snowy wilderness beyond a massive wall with only the Night's Watch to defend Westeros if it comes.

It is absolutely insane that there are people attempting to adapt George R. R. Martin's sprawling fantasy epic to television. Each book is about two inches thick in really tiny type. He hasn't even finished writing them yet. There are a ridiculous number of characters, and factions, and settings, and an enormously complex and difficult backstory. Full marks to HBO for attempting this: my only fear is that this show ends before the story does. (And Deadwood fans will be quick to point out that HBO does have prior form in cancelling these sorts of shows early.)

I think with a show like this it's going to be easiest just to take each plot thread in turn, and say what I liked and disliked. So let's dive in to the Season 2 premiere, "The North Remembers".

Stannis Baratheon
Here's the first of our new lead characters, dead king Robert's brother Stannis. He's a dour, unlikeable man played by Stephen Dillane, seemingly in the thrall of a red-haired cultist Melisandre (Carice van Houten) and her Lord of Light religion. Both actors play their roles very well, because neither is a particularly pleasant person. I think the series is asking a lot of its audience in this episode by throwing us headlong into this new plot thread when we're already invested in several others.


The highlight of this thread is Liam Cunningham as smuggler-turned-adviser Davos Seaworth. Unlike Stannis and Melisandre, Davos is exceedingly likeable. He has a laconic, roguish charm that really makes him stand out. He also acts as a valuable viewpoint character: we can be disturbed and worried about Stannis and Melisandre through Davos, and share in his concerns about them.

Robb Stark
This episode Robb's section is most aimed as easing us back into the series, which I appreciated. He's winning his way south with his army, and has Jaime Lannister captive. It's become public knowledge that Jaime has fathered his sister's children, something that he taunts Jaime over. Richard Madden is brilliant as Robb: he does a lot of acting with his eyes, giving Robb a sort of melancholic, haunted vibe. Robb also sends his foster brother Theon Greyjoy (Alfie Allen) to see his actual father, Baron Greyjoy. This will get picked up on later.

Bran Stark
Back in the Stark stronghold of Winterfell, Bran Stark is learning how to be lord of the manor while the rest of his family is away. Perhaps I'm being unfair, but is there really no one in Winterfell to be in charge beyond a 12 year-old boy? It strains credulity to see him left here in charge, and as a result it's my least favourite plot thread at the moment. This is despite Isaac Hampstead-Wright's wonderful performance as Bran.


Jon Snow
Beyond the Wall, Ned Stark's bastard Jon Snow (Kit Harington) accompanies his fellow Night's Watchmen in a visit to the eccentric lord Craster (Robert Pugh). Craster is a vile old man surrounded by daughters and wives, who beget him more daughters, that he then makes his wives. It is a disgusting, awful concept, and the episode wisely plays it up for the horrific abuse that it is.

Daenerys Targaryen
Daenerys and her dragons spend this episode slowly starving to death in the middle of the desert. Her husband Drago is dead, the bulk of her armies have left, and all that remains is a slow, seemingly inevitable demise. Like Robb Stark's plot thread, this thread seems fairly light on action and is intended to ease us back into the action more comfortably.

The Lannisters
The best parts of this episode are the scenes in King's Landing, as we see King Joffrey's continuing decline in cruelty, Queen Cerce's continuing machinations and Tyrion's arrival to be the King's Hand in the place of his father. It's already been pretty much unanimously agreed that Tyrion Lannister, as played by Peter Dinklage, is the best thing in Game of Thrones. I'd go one step further and say that Dinklage is the single-best thing in American television today. It is a joy to watch Tyrion slowly manipulate his way into a position of power in King's Landing.

The most underrated aspect of the series, highlighted very well this episode, is Sansa Stark. She's trapped in King's Landing, engaged to a mad king who murdered her father and actively despises her, and forced to deny her love and allegiance to her own family. She's a difficult character to love at first, because she was so naively excited to marry a prince in Season 1 and by the time the full horror of her situation became clear I think she had turned off a lot of viewers with her bitchy self-centered attitudes. This is part of what makes me  so fascinated with her character: she has an arc, and is changing perhaps more than any other character in the series. Sophie Turner is giving a fantastic performance as well.

The Score
This isn't a perfect episode: it's a little clunky, and the sheer number of narrative threads makes it a little difficult to dive right back into the series after a nine month break. It remains, however, a monumental achievement in television storytelling. It clearly gets a tick of approval, leaving Game of Thrones Season 1 with a predictable score of 100%.

(Note: this is the 350th post in this edition of The Angriest. Thanks for continuing to read it!)
Posted by Grant at 11:46 AM