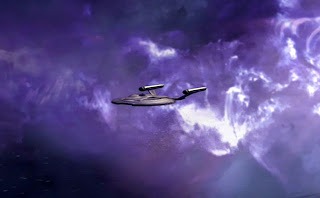 As the Enterprise approaches a dangerous wave of energy in space, the crew must take refuge inside the shielded sections of the ship's warp engine nacelles. When the ship unexpectedly powers up, Commander Tucker discovers that the Enterprise has been invaded by an enemy force, under the cover of the storm.

"The Catwalk" is a nicely paced, well shot suspense thriller. It places the Enterprise in a unique situation, and then finds a clever way for the characters to work their way out of it. It also produces some solid character drama using the most tried-and-trusted technique in the book: shove some people into a confined situation and see what happens to them.

Danny Goldring has a wonderfully authoritative presence as the alien captain in charge of invading the Enterprise. He's on the hunt for three fugitives - who had already boarded the ship in advance on Archer's invitation. To be honest their alien make-up is a little silly: strange cheek bumps instead of the traditional forehead bumps Star Trek goes for, but that's a minor concern.

The episode's resolution is well thought-out and entertaining, and makes good use of the regular cast. As I mentioned, the episode is also a good one for developing character relationships: there's a great scene of T'Pol finally joining the bulk of the crew in their traditional weekly movie night. There are also few nicely placed continuity references for the hard-core, including one reference to Star Trek: The Animated Series.

Like much of Enterprise, this isn't groundbreaking stuff, but it's competently made, consistently entertaining and performed by a generally very appealing cast. This gives Season 2 seven good episodes out of 12, and a running score of 58%.
Posted by Grant at 5:23 PM