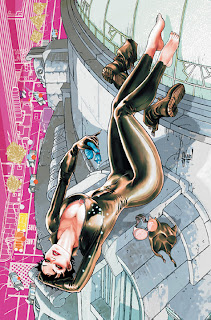 Catwoman is such a difficult title to sustain. First of all, she's a villain, and it's quite tricky making an antagonist into a functional protagonist on a regular, ongoing basis. Secondly she is essentially constructed entirely for a male gaze: traditionally dressed in fetishwear, sexually provocative while romancing Batman in-between criminal acts that are bad enough to make her a criminal but not so bad that we might stop finding her attractive. She makes for a difficult tightrope for any writer/artist team to negotiate: sexualise her too much and she comes off as tacky and vaguely offensive, sexualise her too little and she ceases to be Catwoman.

With the New 52, Catwoman received a solo title for the first time in about three years. The team assigned to the book was writer Judd Winick and artist Guillem March. Winick has since been replaced by Ann Nocenti and March by Adriana Melo, but for now I want to focus on the first six-issue arc since that's what I've read in trade paperback. 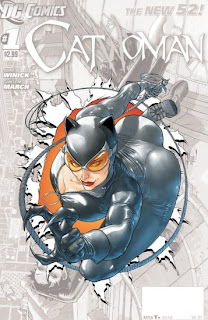 It is, to be honest, relatively dreadful. Winick does have some great ideas. Some of the characters are great, and some of the action is inventive and engaging. The rest, however, feels soaked in an insidious sort of sexual miasma that practically oozes from the page. There's always been a sexual edge between Batman and Catwoman, but as far as I'm aware this is the first time it's extended to blunt on-the-page rooftop screwing.

All of this isn't helped by Guillem March's artwork, which can't help but overtly sexualise Catwoman in every single frame. We see her in various states of undress, as well as in her trademark zip-up catsuit. The cover of the first issue (above) feels particularly awful, with her pouring diamonds down her boob as if it's... well, use your own sordid imagination. The cover to issue #0 (to the right) is actively hilarious, and received widespread Internet coverage for its strange un-anatomical posing. 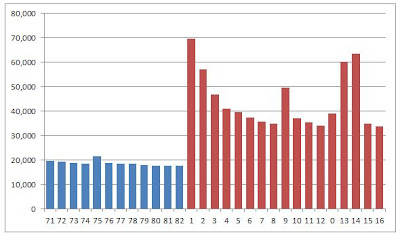 One positive thing I can say for Catwoman is that it certainly has stable sales. Even if you look back at the previous volume sales stayed pretty steady (albeit relatively low) for the last year of its run. In the case of the New 52 edition sales dropped with the now-familiar sharpness from just under 70,000 copies to an average of 35,000 or so. With the odd exception it's stayed there every since - so there's obviously a market for this kind of fetishistic sex object shenanigans. The issue #9 bump is due to "Night of the Owls". The issue #13 bump is due to "Death of the Family".

DC has just put Catwoman into Justice League of America which really makes me wonder if she needs a solo title any more. Unless Ann Nocenti has really picked up the quality, I don't see a strong argument to keep it running.
Posted by Grant at 9:32 AM