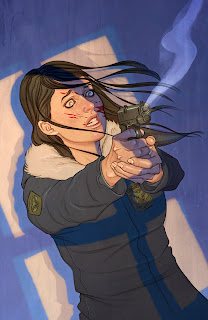 Two weeks ago I listed the DC and Marvel books that I thought were essential purchases for the respectable comic book reader. This week I thought I'd pick out four non-superheroic ongoing monthlies I feel are the most worth your time and business.

Saga (Image) is pretty much a no-brainer: Brian K. Vaughn and Fiona Staples are putting together an absolutely riveting and beautifully emotional book here that combines space opera with elements of romance, character drama and fantasy. If it doesn't win the Hugo Award this year, then the World Science Fiction Convention has no business giving awards to comic books.

Also from Image are Manhattan Projects and Revival. One is a twisted, darkly humorous and extraordinarily violent book about 20th century scientists running amok behind the cover of the cold war. It's written by Jonathan Hickman with distinctive art by Nick Pitarra. Revival is a self-described "rural noir" by Tim Seeley and Mike Norton that has, I think, the best chance to be the next Walking Dead. It's creepy and horrific but, like Saga, focuses on extremely well drawn characters.

A DC Vertigo book that I've been enjoying very much in trade paperback collections is Peter Gross and Mike Carey's The Unwritten. This is a natural heir to Neil Gaiman's Sandman: fantastical, lyrical and deeply inter-textual. It's clever stuff, and engaging fantasy too.

That's the four that I'm pushing: Saga, Manhattan Projects, Revival and The Unwritten. All four are available in monthly issues and in trade collections. Check them out, then let me know what you think.

Under the cut: reviews of All-Star Western, Aquaman, Batman Incorporated, Doctor Who: Prisoners of Time, The Flash, Guardians of the Galaxy, Journey into Mystery, The Massive, X-Men Legacy and Young Avengers.

This was a great issue of All-Star Western, particularly if - like me - you're also a reader of Demon Knights and Stormwatch. The main strip, featuring Jonah Hex and Dr Arkham, features not only the Wayne family but the arrival in Gotham City of Vandal Savage, co-star turned antagonist of Demon Knights. It's a great first part of a story about a city struck down by plague, and a criminal conspiracy behind it. The back-up this month is the debut of the 19th century Stormwatch, which is a predictably steampunk-inspired team that I'm actually quite excited to see. A team-up via time travel with their 21st century equivalents might just be what that title needs. (4/5)

Aquaman #17
DC Comics. Written by Geoff Johns.
It's taken 18 issues, and I get the feeling that Geoff Johns has been resisting this moment, but I am overjoyed that it has finally come. In this issue, a year and a half after his high profile relaunch, Aquaman finally talks to fish. It's the superhero he is most ridiculed for, and yet if you're a fan of Aquaman it's an integral part of the character's appeal. I love that he's under the ocean talking to fish again. I love that, in the aftermath of "Throne of Atlantis", he's returning to Atlantis. Hopefully there's much Antlantean intrigue and underwater shenanigans to come. (4/5)

DC Comics hasn't exactly gone out of its way to keep the ending of this issue a secret: they told the New York Post all about it, plastered it over their own website and put it on the cover (beautiful cover by the way, and nicely evocative of a near-identical Batman cover a few years ago). In case you haven't been spoiled already, and want to stay spoiler-free, then seriously stop reading this review now.

This issue, "The Boy Wonder Returns", depicts Damian Wayne's courageous and disobedient attempt to rescue his father and confront his mother. It does not end well for him. He challenges his massive, deadly clone (it's a complicated storyline), gets beaten to a pulp and then impaled on a sword. By the time his father reaches him, he appears to already be dead. In many ways this issue isn't the emotional gut-punch it's been hyped up to be, because any emotional fallout to Damian's death is clearly going to happen next month. Instead what we seem to get is Damian's "last hurrah". The highlight of the book is his team-up with Nightwing, and the banter between them. The Batman-Robin pairing of Dick Grayson and Damian Wayne was an outstanding one, and I am delighted that it was revisited one last time, even if it was just for a few pages.

I keep using terms like 'appears' and 'seems' for a reason. The truth is, this could all very easily be an additional plot twist. The cover deliberately echoes Grant Morrison's widely hyped "Batman RIP" story arc, and Batman did not actually die in that book. While he did die in Final Crisis around the same time, he also came back to life pretty much immediately. Damian's grandfather also owns a lazarus pit: drop a corpse inside and it comes back to life. Plus, as "Batman RIP" so emphatically reminded us: 'Batman and Robin will never die!' If it is a fake-out, it's a well-written one. If it is indeed Damian's final adventure, then what happens next will pretty much dictate how this storyline works out. (4/5)

Doctor Who: Prisoners of Time #2

This is a much better issue than the first, which pleases me immensely. It nails the characterization of the second Doctor, Jamie and Zoe far better than the last issue presented the first Doctor, Ian, Barbara and Vicki. Once again we've got a gratuitous old monster appearing (two if you pay attention to the background), but they're not the focus of the story and do actually give it an extra dimension. I like when a comic book can do a solid "done-in-one" storyline, albeit with a predictable final page kick that repeats the one seen last month. The art is by Lee Sullivan, who has many years of experience in capturing the looks of Patrick Troughton, Wendy Padbury and Frazer Hines. He's a great artist who should be in far more demand than he appears to be.

I think I like this sort of 50th anniversary comic: each issue reminds you why each Doctor was so great, while slowly building up to what I assume will be a two-issue finale at the end. (4/5)

The "Gorilla Warfare" arc finally concludes this issue. It's been a bit of a meandering storyline these past few months, but it concludes with The Flash in a much better place, narratively speaking. We've got the legendary Rogues Gallery established again, and a host of supporting characters and plot threads for Barry Allen to interact with. There's even a final page cliffhanger revealing the introduction of yet another classic piece of Flash continuity. It's not the best issue Manapul and Buccelatto have produced, but it's solid and enjoyable. (3/5)

Guardians of the Galaxy #0.1

I thought this was the first issue of Marvel's relaunched Guardians of the Galaxy, but instead it's an extra-length prequel issue telling the origin of Star Lord, one of the key characters in the series that begins next month. As I had no real idea who the character was, this turned out to be a pretty useful read. It's also a nice, relatively self-contained issue. Steve McNiven is a fantastic artist as well, and illustrates this origin perfectly. Obviously if you're keen to find out what Guardians of the Galaxy is like, this issue won't help you (and what the hell is Iron Man doing there?), but it's still a very entertaining book. (4/5)

Sif and the berserkers team up with the Superior Spider-Man on the streets of New York City. I absolutely love the interplay between Sif, who's not quite herself at the moment, and Spider-Man, who is also not quite himself at the moment (having had his body taken over by Doctor Octopus). This issue is a nice change from the more Norse-inspired previous issues, but still manages to keep the story moving forward. Valerio Schiti's art is very good as well. This book hasn't fully charmed me like Red She-Hulk, but it's close. Marvel Now may not be as effective a relaunch as DC's New 52, but it's doing a very good job publishing new titles for female heroes.  (4/5)

The third - and, thus far, best - storyline of The Massive winds up here in a nicely climactic and considered way. The characters are well realised, the art is solid, and yet... there's something very slightly off about this book. It's very considered, rather sedate; I keep expecting it to explode into wall-to-wall mayhem and Wood keeps holding back. I'm enjoying it, but to be completely honest I'm enjoying it slightly less as it goes on, and this is perversely despite the last issues being so good. It's like I'm continuing to appreciate without entirely liking - if that makes sense. (3/5)

David Haller faces off against the mutant eyeballs Luca Aldine in the grounds of the Jean Grey School. No, seriously: the villain of this comic is a pair of floating psychotic blue eyeballs. I am really enjoying this book: it's got an original lead with an exceptionally visual way of portraying his mental illness, it puts the standard X-Men heroes into the position of antagonists (or at least, very far from friends) and in the case of this issue it ends on an awesome monster cliffhanger. (4/5)

Wiccan and Hulkling go on the run from an inter-dimensional villain, with the assistance of Kid Loki. This issue features some of the most inventive use of the comic book medium I have seen in years. On top of that it's funny, dramatic, well-characterised and beautifully illustrated. On top of that it co-stars Kid Loki, Marvel's best character in years. I'm generally much more of a DC fan than a Marvel fan, but I can't lie: between this, Hawkeye (which disastrously fell out of my order this week) and Daredevil, Marvel's beginning to get the majority of the kickass titles. (5/5)

Winner of the Week: Easily Young Avengers. I love this book.
Loser of the Week: The Massive, I guess, although it's not really a loser - just the least best of what I bought.
Note: two books I've bought aren't reviewed here because I haven't read them: Hawkeye and Prophet. I'll review them next week if I remember.
Posted by Grant at 6:53 PM