Judging the New 52: Batman and Robin 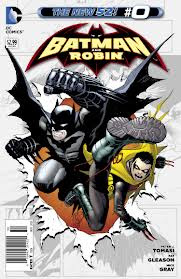 How did DC Comics manage to go for so many decades without a book titled Batman and Robin? It seems a no-brainer.

This book originated as a follow-up to Grant Morrison's run on Batman, and featured Dick Grayson taking over as Batman in the place of the presumed-dead Bruce Wayne, and Wayne's ninja-trained son Damian taking over as the new Robin. It was an absolutely stunning book, the plot threads of which were picked up in Morrison's Batman Incorporated.

Relaunched along with the New 52, the book continued the same relatively tight focus on Damian-as-Robin, only with a resurrected Bruce back as Batman. Since the relaunch the book has been the work of writer Peter Tomasi and artists Patrick Gleason and Mick Gray, and they've done a great job with it. While Batman has been hogging all of the critical acclaim and Detective Comics has struggled to find its momentum, Batman and Robin has been quietly chugging away, producing some of the most solid and enjoyable superhero stuff in the New 52.

For me the appeal is entirely about Robin. Damian Wayne is a wonderful creation: disdainful, cocky, callous, dangerous, and yet for all of those elements he's still very clearly only a child. He has a child's enthusiasm. He has that hilarious "tt" verbal tick. He loves his dog Titus. The book has been a great read because it's allowed Bruce to be a father, and allowed Robin to be a "boy wonder" again for the first time since the 1950s.

Where the book goes from now, however, is a bit of a mystery. Damian Wayne died in Batman Incorporated #8. The most recent issue of Batman and Robin (#18) featured Bruce's grief over his son's death. Future issues will pair him off with a series of sidekicks, one per issue starting with Batgirl. After that, however? Who knows. Maybe Damian's not really dead. Maybe he'll come back to life. Maybe he'll be replaced. Maybe this book will get cancelled, although going by its sales I doubt that very much. 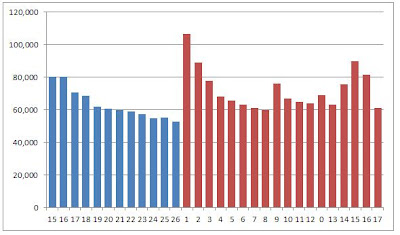 So: the original Batman and Robin is in blue. Issues #15 and #16 were the final two issues of Grant Morrison's run, starring the Dick-Damian combo. A rotating group of writers and artists handled the book's remaining 10 issues, as sales steadily declined to about 52,700 by August 2011.

With the launch of the New 52, Batman and Robin's second volume opened with sales of 106,500 units - more than the original volume launched at, and one of the healthiest openings for any of the New 52 titles. Sales then dropped down to the 60,000 mark over the next seven issues. If you look at the red section of the graph and ignore the bumps caused by crossovers and events, 60,000 seems to be the baseline for this book. It'll be interesting to see how it goes now, of course: I strongly suspect Damian was the book's strongest selling point, and he's no longer there.