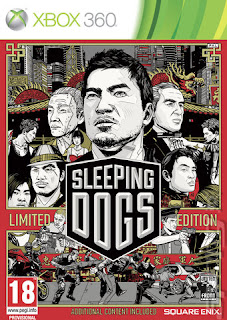 There's always a problem when it comes to reviewing videogames: how much are you supposed to play before you write the review? Do you have to finish the game? That's not necessarily a good idea; it took me until 2009 to finish Sonic the Hedgehog 2, and I still haven't finished Wizball on the Commodore 64. Is it OK to play it for a few hours and make a judgement based on that? Maybe, but I've played plenty of games - mostly Japanese RPGS - that drag like nobody's business for the first few hours before exploding into something wonderfully enjoyable and addictive.

I'm probably about halfway through Sleeping Dogs, the new open world crime game from Square Enix, and I feel that's probably long enough to make some broad judgements. It's been uncharitably described across the Internet as a Grand Theft Auto clone, which does the game a disservice. It's very much its own thing, and if you're into narrative-based open world videogames (GTA, Assassin's Creed, et al) it's definitely something you should consider checking out.

It's widely known that Sleeping Dogs started life as True Crime: Hong Kong, a third iteration of a fairly unenjoyable franchise of action games that was cancelled following the poor sales and reviews of the second game in the series. It was subsequently purchased by Square Enix, completed and has been a surprise hit in stores around the world. A lot of its success is, to be fair, probably down to timing - it managed to come out without much competition and by releasing in August it's escaped to September-November crush of AAA titles that come out every year to capitalise on the Christmas market. It's still an immensely enjoyable game in its own right, and does deserve the success it's getting. 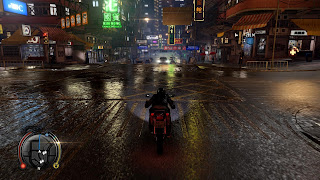 In Sleeping Dogs the player controls Wei, a police officer in deep cover within Hong Kong's Triads. You play a series of missions as you advance your way higher and higher in the organised crime community, all the while gathering evidence and influence that may let you bring down the Triads once and for all. I can't comment on whether or not you succeed in this goal, because I'm still playing it, but the game does do a fantastic job of balancing your missions and allegiance between two masters. Are you going to stay a cop, and uphold the law? Or are you going to fully embrace the Triads, turn rogue and take the power that's offered to you? The game follows a tight narrative, so the ultimate choice may not be up to you, but a combination of strong storylines and great voice acting makes it a very ambivalent, conflicted experience. The game is certainly heavily inspired by Hong Kong cinema, although gamers citing John Woo and Tsui Hark are a little off the mark - Sleeping Dogs is lifted more from the likes of Andrew Lau, Alan Mak and Felix Chong. Think films like Infernal Affairs or Young and Dangerous and you'll get a better idea of the game's content and tone.

The videogame Sleeping Dogs most actively resembles is not Grand Theft Auto IV but rather Shenmue, Yu Suzuki's ambitious, critically flawed martial arts adventure for the Sega Dreamcast. The combat engine is very similar, allowing the player to chain together increasingly powerful strings of punches, kicks and throws. The "quick-time event" mechanic created for Shenmue, and copied by quite a few games since, crops up here too. The themes of honour, loyalty and vengeance are shared between both titles. Both games also keep a relatively firm hand on guiding the narrative, as opposed to GTA's more freeform "do what you like" sort of pace. 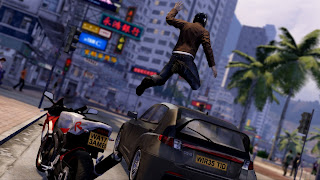 The driving portions of the game are not as satisfying as the combat, largely due to a tendency for vehicles to handle a little too delicately. They often lack the comforting weight that made cars in GTAIV so fun to drive. It's still enjoyable, but takes a few trips to settle into the physics engine.

The Hong Kong setting is evocative, although anyone expecting an accurate depiction of the city will be disappointed. For one thing, gameplay is limited to Hong Kong Island, with no jaunts across the harbour to Kowloon or the New Territories. For another, the island has been shrunk down to four suburbs: North Point, Central, Kennedy Town and Aberdeen. It's a version of the city designed less for fidelity to real life and more for convenient gameplay, and this pleases me: better to have an enjoyable game that captures the flavour of a city than a 100% accurate cityscape that's a dog to play. For one thing, accurate Hong Kong traffic would render most car chases impossible.

I'm gripped by Sleeping Dogs, and have been playing it a little bit each night for a couple of weeks now. It's definitely one of the best console games of the year, at least to my tastes, and I'm grateful Square Enix had the foresight to rescue it from oblivion and give it the chance it deserved.

I've been playing the Xbox 360 version of the game, for what it's worth. I have no idea what differences there are between this and other versions.
Posted by Grant at 1:31 PM