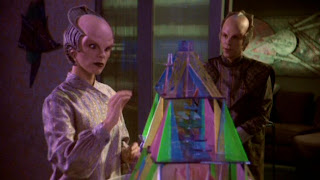 A continuing border dispute between the Narns and the Centauri lead to Ambassador Mollari receiving a second visit by the mysterious Mr Morden. One of Garibaldi's best informants is fatally wounded, his last words to the security chief 'They're going to kill him!' Sinclair proposes to Catherine Sakai. Delenn has something important to tell Sinclair, but it may be too late.

So this is it: the final chapter of Babylon 5 season one. By the end of this episode, one of our protagonists will be at death's door, one will be making an unprecedented change, one will have made the greatest mistake of their life and another will be too late to discover the secret of theirs. It's pretty much the most dramatic, edge-of-your-seat hour of television that Babylon 5 has managed so far, because a lot of the disparate threads running through the series get brought together and kickstarted right here.

First up, Garibaldi and the plot to assassinate President Santiago. We've had a lot of information provided over the course of this season related to the Presidential race on Earth, the rise of anti-alien rhetoric and the Home Guard, questions over the influence the Psi Corps has over politics, and the increasing tension over Santiago's presidency. Suddenly all of these elements, many of which felt like background, are brought into sharp relief as the Earth government effectively undertakes a secret coup d'etat, with Vice-President Morgan Clark at its head. There's a lot of death of John F. Kennedy being played out here, obviously in the shocked reactions of the humans learning of their President's death but also in the canny way the swearing-in of President Clark (seen via Earth television broadcasts) emulates the real-life swearing in of Kennedy's successor Lyndon B. Johnson. Garibaldi being betrayed by one of his own security guards and being shot in the back doesn't interest me as much as it possibly should have, mainly because it deals heavily in cliche. The overall conspiracy storyline is great, however, because the seeds have been there since the beginning and they've only just been dragged into focus now.

Delenn makes her long-awaited change, using the strange device made out of perspex (well okay, it's probably not perspex in the fictional Babylon 5 universe, but it certainly looks like it) to weave herself a cocoon. This plot thread doesn't feel like it's come out of nowhere, but it is a satisfying progression of it, and leaves a great mystery hanging over the gap between this and Season 2. The moment where Sinclair remembers that Delenn was going to explain everything to him, and arrives to get some answers moments too late, is heartbreaking. The pained look on his face is striking.

Londo gets revisited by Morden, and gleefully accepts his offer of help with the Narn colony in Quadrant 37. (if someone can explain how something can have 37 or more quadrants, I'd be much obliged. Does JMS have a turn of phrase? Sure. A sense of geometry? Not so much.) Morden and his associates' solution is to raze the entire colony to ground, bombing it so violently that it effectively ceases to exist. G'Kar's reaction to the destruction of the colony can wait for Season 2: here we're given Londo's reaction, which is essentially pure horror. The grand-standing and vocal belligerence of the past season evaporates when so many real lives have been lost on what seemed like a whim. Sure, Londo may receive accolades and social standing on Centauri Prime for his part in the obliteration of the Narn colony, but it's a success he suddenly doesn't want. We also get a wonderfully foreboding scene between Morden and his mysterious, non-humanoid masters, which reveals that they have extensive plans for Londo in the future. It's a great set-up.

By the end of the episode, it feels like the entire series has been turned upside-down and vigorously shaken. Sinclair himself says, in his final line, 'Nothing's the same any more.' Most science fiction series would feel content ending a season with one, maybe two, mysteries or plot threads. Babylon 5 leaves half a dozen. This is a gripping nail-biter of a finale, and has left me fully engaged in this series again. It's sneaky that way.