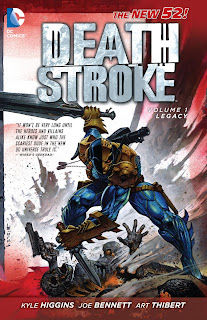 The character had a relatively successful monthly comic before: Deathstroke the Terminator, that ran for 60 issues from mid-1991. It wasn't a huge surprise to see him get a second shot at a solo title in September 2011, since DC were casting their net for comic book ideas fairly widely, and it made sense to try a villain-centric comic out again. Kyle D. Higgins wrote the first eight issues and then, when sales weren't going particularly well, he was replaced by Robert Liefeld, who also replaced Joe Bennett and Art Thibert as artist.

In short, the Higgins run was okay: it wasn't the best book of the New 52, but it was solidly plotted and had a lot of consistency to it. I enjoyed it a hell of a lot, and it certainly got better issue-on-issue. The Liefeld run, which has been truncated due to the writer/artist's acrimonious split from DC Comics, was incredibly bad. Dire artwork combined with cliche-ridden plot and painful-to-read dialogue. I could be polite, but this really has become the worst DC Universe book currently in publication. 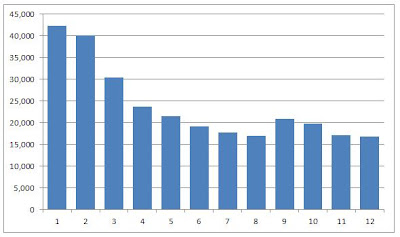 Sales show a book on an unavoidable run towards cancellation. First issue sales were north of 40,000, which does suggest there was an audience interested in a Deathstroke comic. They actually held on for the most part for issue #2 as well. Then it's a sharp, fall over the next two issues, followed by a fairly savage attrition up to issue #8.

The Liefeld relaunch did give the comic a 23% bump that was enough to punt it back into the safety zone over 20,000 copies, but by issue #12 sales have dropped to less than 16,800. That's less than issue #8, and pretty much guarantees this comic's days are numbered.

It'd be nice to see Deathstroke get one last chance to sell, now that Liefeld's gone and it has a chance to improve. I suspect it's just a matter of time now.
Posted by Grant at 2:59 PM