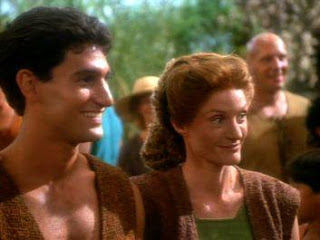 Sisko and O'Brien are scouting unexplored systems near the wormhole in the hopes of finding new planets for the Federation to colonise. One planet turns out to already have a human colony living there, and so they beam down to greet the colonists. They immediately discover that a mysterious energy radiating from the planet nullifies all technological devices, including any means of beaming back to their ship.

"Paradise" is, for much of its running length, an increasingly tense drama that pits Sisko against Alixus, the charismatic but dictatorial leader of a technology-free colony. She is a classic blend of vinegar and honey, sweet and caring on the outside but ruthlessly defending her authority at the same time. It's a battle of wits that really made an impact on me when the episode was originally broadcast - I remembered this as one of the best episodes of Season 2.

Nope. It turns out that, thanks to a third act resolution, "Paradise" makes me boil with what we might call "fan-rage". I love Deep Space Nine, but when they get something critically wrong that derails the episode as a whole, I get furiously angry about it.

Gail Strickland plays Alixus brilliantly. She rarely stops looking sympathetic or concerned, all the while stamping down on the slightest hint of dissent or rebellion. She is a perfect example of what the Germans describe as backpfeifengesicht, meaning "a face badly in need of a fist". Bless the Germans, they have a name for everything. Like fan rage: "weltraumneunragenmaken".

Julia Nickson has a supporting role as Cassandra, one of the colonists. You may recognise her from Rambo: First Blood Part II, or (more likely) as Catherine Sakai in Season 1 of Babylon 5.

The bulk of the episode is a nice slow build-up of pressure from Alixus versus resistance from Sisko. He wants to look for a way to escape the planet. She wants him to stop giving her people false hope and help them farm the land. He wants to find a way to re-activate technology to save a dying girl. She wants him to let the girl be treated with local herbs and natural medicines. Before long Sisko's sentenced to spend hours in the middle of the day locked inside an unventilated metal crate. He's dragged out and given the chance to remove his Starfleet uniform and join the community, and Sisko stubbornly crawls back into his box.

The final act of the episode pretty much destroys any chance of treating the rest seriously. O'Brien discovers that Alixus is responsible for planting hidden machines that have nullified all other technology for the past decade. They successfully make contact with Kira and Dax and prepare to take Alixus back to Deep Space Nine to face justice. The remaining colonists, however, choose to remain on the planet: it is their home, and they have grown to appreciate that Alixus was right and that their lives are better without technology. There are a lot of problems right here that are pretty much blindingly obvious to anyone with half a brain. Let's quickly run through them.

First of all, despite the colonists being human the planet is not in Federation territory and is not any officially recognised (or known-of) Federation colony. Surely Sisko's offhand decision to take Alixus (and her son, come to think of it) back to face trial seems a legally dubious one at best. What's more the colonists don't even question it. Perhaps they're happy to be rid of Alixus after all the pain and needless death she's caused. But no, they're not! They are in fact quite happy with Alixus, immediately forgive her, and with contended, knowing smiles explain that she was right, they're better off where they are and they're staying on the planet. They may even turn the anti-technology machines back on.

Let's ponder that for a while. This is a community of human beings who have just discovered that they crash-landed on the wrong planet at the whim of one woman, they suffered the separation from loved ones and family back home at the whim of the same woman, they've all been unwittingly forced to stop being scientists and engineers and start being farmers and carpenters, four people have died due to lack of adequate medical care, and they're all happy about this? There's no shock, or recriminations, or tears. There's not even a moment of rage. Not a whisper of disquiet. "Oh, what's that? I was lied to and the last 10 years of my life were needlessly wasted at the whim of an angry anti-technology hippie? Ah well. No harm, no foul. In fact by astounding coincidence all 50 of us really like what happened to us. Surely, four of us died of a horrible disease that could have easily been treated, and any time any of us did something Alixus didn't like she had us locked inside an uninsulated metal box, and for all we know she was sneaking around the back every night to eat a stockpile of Tim-Tams from her secret refrigerator, but that's okay. We're all happy primitive villagers now. We like living in the Middle Ages. It's like a fucking holiday."

No soup for you, "Paradise".Fifteen episodes in, still only nine good ones. That's a running score of 60%.
Posted by Grant at 6:31 PM