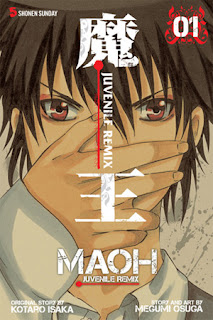 In Maoh: Juvenile Remix, high schooler Ando struggles with the possibility that he may have psychic powers; a telepathic ability to force other people to say whatever he wants them to. Meanwhile, a group of local vigilantes are spreading across town, led by Inukai - a charismatic cult leader who may be planning more for the town than he appears to be.

Maoh: Juvenile Remix is a supernatural-themed manga by Megumi Osuga, based on a novel by Kotaro Isaka. It was originally serialised in Shonen Sunday from 2007 to 2009 before being collected into English language editions by Viz Media.

It's a largely entertaining, yet troublesome, read. As a result I'm not entirely certain what I think of it. 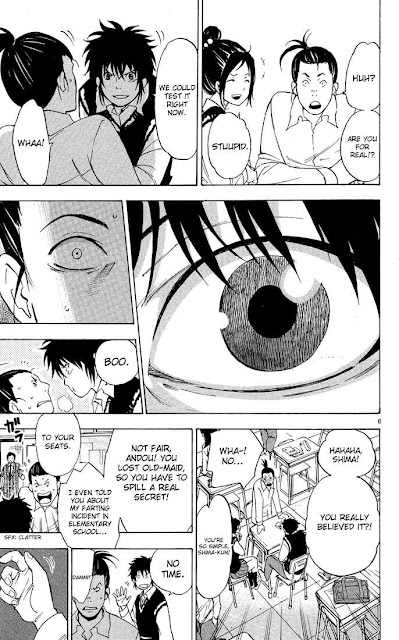 There are standard tropes and conventions that you can see in manga again and again, regurgitated from title to title with an increasingly depressing regularity. One of those is the manga about the high school student with supernatural powers. I'm honestly losing track of how many books I've read that follow this trope, but it's certainly enough that it's getting tiresome. So once again we've got a male high schooler who discovers his psychic talents, and starts to use them in a creepy, morally dubious storyline. At least Death Note switches things around a bit by making the student the villain; here Ando is just yet another recalcitrant, self-doubting and under-confident hero.

Maoh also suffers a bit from including some leery, ugly depictions of young women. In one scene young woman is groped on a train with an obligatory close-up of her underwear. In another another woman "forgets" to button her shirt, revealing her bra underneath. In a third, Ando accidentally shoves his face into someone's cleavage. In all three cases it's unnecessary, and in all three cases it left me enjoying the book a little less. It's possibly to overlook this aspect of the book and try to enjoy the rest, but the question is whether one should have to do this - or simply go find a manga that doesn't occasionally get creepy and sexual about teenage girls.

Asides from the two caveats above, Maoh: Juvenile Remix is quite an entertaining read. It boasts expressive art and an intriguing plot. There's some lovely imagery involving the Grasshoppers - masked vigilantes protecting Ando's town - that gets rather ominous. Over the course of this volume what seems like a core plot element is raised: are the Grasshoppers a force for justice, or the spearhead of something much more dangerous?

This is the first of 10 volumes. Thanks to a ridiculously cheap sale on manga a few months back I already own Volume 2, so I'll keep reading through that at least. If I didn't already own the next book, I'm not sure how quickly I'd be rushing to continue. The story is strong and the art is good, but there is an overall sense of "been there, done that" and some fairly unpleasant depictions of young women. There are definitely better manga out there, which ultimately makes this particular series a hard one to enthusiastically recommend.
Posted by Grant at 10:13 AM