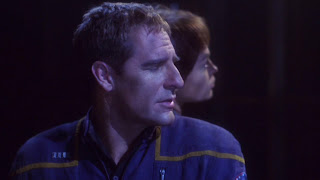 I'm a tiny bit confused about this one, because the packaging of the Enterprise DVD claims that this is the 14th episode of the series but the DVD menu claims it is the 13th. I followed the menu; looking at Wikipedia it seems the packaging was correct - so we're doing this one out of order, and I'll get to episode 13 next time around.

Following the Andorian destruction of the P'Jem monastery (remember "The Andorian Incident"?), the Vulcans withdraw their participation in assisting Starfleet and the human expansion into the galaxy. A Vulcan ship is assigned to escort Subcommander T'Pol back to Vulcan, but Archer takes the intervening 48 hours as an excuse to persuade T'Pol to fight for her right to stay onboard the Enterprise.

This felt completely strange and refreshing: "Shadows of P'Jem" is a fully-fledged sequel, specifically following up on the plot elements and characters of "The Andorian Incident" and exploring the impact that the destruction of P'Jem has on the Vulcans, Starfleet, Captain Archer and particularly T'Pol. I don't recall Star Trek doing this sort of thing too often - usually they beam down to a planet, muck about with the local politics, and then go on their merry way. It's a traditionally consequence-free zone. This episode is all about consequences and choices, and is a very enjoyable experience as a result.

There's some great character work between Archer and T'Pol, particularly an extended sequence of the two attempting to negotiate being tied together in someone's barn. There is one cringe-worthy moment of Archer getting his face shoved into T'Pol's cleavage, but to their credit neither actor makes the slightest attempt to sexualise the occasion. It's one mis-step in a lengthy, amusing sequence that managed to get laughs and express character at the same time - check, for example, the differing ways Archer and T'Pol eat their food.

Gregory Itzin, probably best known for playing the weaselly President Charles Logan in 24, plays a marvellously arrogant Vulcan commander here. He's a great actor, and brings the right amount of arrogance and logic to the part. It's something Gary Graham is completely failing to do - he appeared as the Vulcan ambassador in the series pilot and briefly returns here, and he's probably the least logical and controlled Vulcan possible.

Mentioning the other major guest star would spoil a surprise, so I'll leave it by noting I enjoyed the performance and didn't remotely see the character coming.

I think I've watched enough of this season now to address a growing elephant in the room: why did we all hate Enterprise so much? It was critically lambasted on release, and largely dismissed by fans, yet when watching it now I'm finding it to be a vast improvement over Star Trek: Voyager and a highly enjoyable science fiction TV series in its own right. The characters are appealing - and even the ones who didn't make the best first impression are beginning to improve (Lt Reed gets some decent screen time here, that doesn't involve pineapple cake). Was it just franchise fatigue? Too much too soon? A general dislike of prequels? The more I think about it the less I can determine why this series didn't grab the attention it probably deserved. Even the theme music has grown on me.