House Calls #2: "Dinosaurs on a Spaceship" 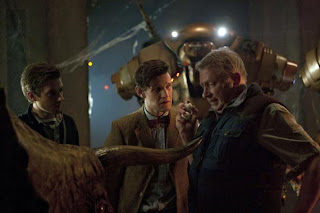 People have asked me in the past why I'm so into Doctor Who. One of the best examples of why I love this series so much is the latest episode: "Dinosaurs on a Spaceship". Name me one other television drama in the history of broadcasting that can not only combine tidal-powered spaceships, dinosaurs, Queen Nefertiti of Egypt, a big game hunter, argumentative robots, a 24th century Indian space agency and a time-travelling alien, but combine them in a way that feels both effortless and par for the course.

Doctor Who is coming close to its 49th anniversary, and one of the greatest reasons (if not the greatest) for its longevity is its sheer versatility. You can throw pretty much anything at Doctor Who and it can be made to work. "Dinosaurs on a Spaceship" is the maddest example of this ability in recent years, and is a marvellously silly, self-aware, overwhelmingly entertaining hour of family TV.

It's beautifully cast. The main guest star is Mark Williams, here playing Rory's dad Brian. I've been deeply amused that Williams appears to have three separate fanbases: those recognising him as Harry Potter co-star Arthur Weasley, those recognising him as occasional Red Dwarf character Olaf Petersen, and those recognising him as one of the cast of The Fast Show. I'm primarily in the latter category, and admittedly spent much of the episode saying things like "...and then I flew a spaceship and saved the entire planet Earth. Which was nice." and "Oooh! Suits you, sir."

Of course it's also got Riann Steele giving a great performance as Queen Nefertiti, as well as Rupert Graves as big game hunter Riddell. Both bounce off each other in an amiable fashion, even if Riddell's been deliberately scripted to be old-fashioned, sexist and a little bit tiresome.

Of particular note is David Bradley (also from Harry Potter) as Solomon, the episode's villain. He's alarmingly effective. He's utterly ruthless and repellent, simultaneously detached and charismatic, and gives the episode a much-needed sense of focus. His offsiders, two chatty and argumentative robots voiced by David Mitchell and Robert Webb, are hilarious.

There's a very delicate balancing act going on here, because "Dinosaurs on a Spaceship" has some of the broadest comedy seen in Doctor Who in quite a while but also some very hard-hitting moments of drama. When Solomon executes a triceratops (that felt so ridiculous to type just then) the Doctor's calm, measured response is positively chilling.

And then of course the Doctor murders Solomon in cold blood. He does it in a rapid-fire, oh-so-clever Doctor Who kind of a way, but the murder's still there. It's not the first person that the Doctor has killed - he's even committed genocide upon occasion - but there was something very personal about Solomon's death here. He didn't need to die. Instead he just happened to make the Doctor very, very upset.

I was very pleased with how the episode elegantly tied the spaceship full of dinosaurs to the Silurians. It felt unobtrusive but logical, and helped attach the episode to the series as a whole rather nicely.

I really enjoyed this episode. I was honestly dreading it: the title sounded silly, it had too many disparate elements and it was written by a writer whose work has not impressed me greatly in the past (Chris Chibnall, who was head writer for Torchwood's first two seasons). In the end it surprised me. It was a delight. Two episodes into Season 7, and we're two for two.
Posted by Grant at 9:47 AM