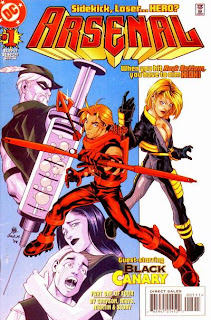 It's a hard life being Roy Harper. First you get to be called Speedy, which is pretty much the silliest nickname of all the DC sidekicks. Then you suffer the indignity of becoming a heroin junkie. Then when your friend and mentor Green Arrow gets killed the skies above Metropolis, you don't even get the chance to assume the name and take over in his place. Now your three year-old daughter Lian has been targeted by the immortal villain Vandal Savage, and you're going to have to use all your skills to protect her and get to the bottom of his current operation.

Arsenal is a four-issue DC miniseries written by Devin Grayson with art by Rick Mays. It stars, as you can see from above, former sidekick Roy Harper - originally Speedy, later Red Arrow, and in between going by the code-name Arsenal. It originally came out in 1998, and as far as I'm aware it never got collected into a trade paperback.

I'm not sure why. It's not a classic miniseries, but it's a breezy, enjoyable one. Devin Grayson was a DC writer I had a lot of time for. I loved her work on Gotham Knights and Nightwing, and she keeps things pretty entertaining here. Rick Mays has a nice, slightly cartoony art style that suits the script wonderfully.

This is ostensibly an Arsenal comic, but as the series goes on it also features Green Arrow (the Connor Hawke version, not the at-that-point-dead Oliver Queen) and Black Canary. Connor doesn't show up in this first issue, but Black Canary does, and the comic does a nice job of expressing the long-running friendship between her and Roy. Lian, Roy's daughter with villain Cheshire, is cute as a button too; drawn ridiculously tiny and given a lot of good comedic moments.

The late 1990s were an underrated, enjoyable period for DC Comics, and I think this opening issue is a good representative example. It's a brighter, funnier time than a lot of what we've received in the last few years: no rape, no violent murder, no people getting impaled on the end of sharp pointy things. That last one seems to have been happening a lot lately.

Of course some years down the track Lian is brutally murdered to become the youngest "woman in refrigerator" in comic book history, then Roy loses an arm, takes drugs again and beats up some muggers with a dead cat (I'm not making any of that up, as I said it's a hard life being Roy Harper), but for now it's a cheerier time in the DCU, and Arsenal is a pretty fun read.
Posted by Grant at 10:21 PM