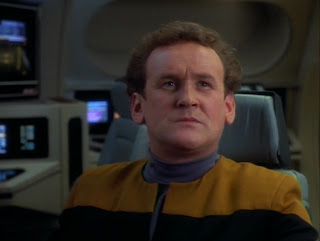 Chief O'Brien arrives back on the station after helping the alien Paradas prepare for their peace conference. The rest of the station crew appear to be behaving strangely: treating Miles differently, making unauthorised adjustments to equipment, and talking behind his back. As his paranoia increases, Miles comes to realise that something has taken over his crewmates - and the Paradas peace conference may be at risk.

This is one of those episodes where discussing the plot also spoils the plot, since it's very much a "what's really going on with the station crew" kind of a story. As a result, I'll drop the rest of this review behind a cut. If you've arrived at this post directly, and don't want the ending spoiled, I'd stop reading now.

"Whispers" is highly reminiscent of the Philip K. Dick short story "Impostor". Actually, scratch that: let's try again. "Whispers" is a bald-faced, knowing act of plagiarism, taking Dick's rightfully acclaimed story, shaving off the serial numbers, coating it liberally in technobabble and throwing it up onscreen with a disingenous air of creativity. The producers should be ashamed. In particular Paul Robert Coyle should be ashamed - he's the sole credited writer of this episode, and therefore must shoulder the bulk of the blame.

This is all a great pity, because had "Whispers" included one simple "Based on a short story by..." credit, it would stand as one of the most enjoyable episodes of the season. There's a great ratcheting-up of mistrust and paranoia, strong characterisation and a great "kicker" in the final scene where O'Brien discovers that he's not actually the real Miles O'Brien at all.

It's an episode that's enjoyable when viewed twice, and for different reasons each time. The format of narrative television encourages us to side with O'Brien the first time around - we know the character, he's narrating it to a computer log, why wouldn't we trust him? The second time around we know he's not the real O'Brien, and suddenly the suspicious, paranoia-inducing behaviour of the crew seems utterly logical and in character.

I must admit it does feel slightly strange to have two O'Brien-centric episodes in a row, since this follows immediately after "Armageddon Game". Then again, Colm Meaney's such an entertaining actor I can hardly complain at seeing more of him than usual.

I really want to give "Whispers" a tick of approval, because it is a genuinely well-written, acted and staged episode - but I just can't get past the plagiarism. It's a big, nasty word to aim at a writer, but I aim it knowingly. This script rips off Philip K. Dick. It's not a variation, it's not a riff, it hasn't been "inspired by". It's just creative theft. So we're now on nine good episodes out of 14, or 64%.
Posted by Grant at 9:14 AM