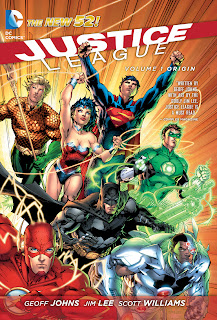 One of the aspects of comic book publishing that can often be overlooked from a sales perspective is the sale of trade paperbacks and hardcovers - the monthly comic books all gathered up together and sold as books. The trade paperback (tpb) market is crucial to a lot of comics, particularly more mature non-superheroic works such as Fables, The Unwritten and the like. These titles don't necessarily sell enough copies to be commercially viable in monthly comic form, but rake in the cash over time in bookshops and specialty stores.

So I figured, with three months' worth of data available on the sale of New 52 collections, it might be worth having a quick look to see how things are selling. A few caveats: Diamond only reports on the sales of the Top 300 books, so once a collection falls out of that range we can't tell if it's still selling; also this data only covers sales via Diamond, which means the direct comic shop market and not Amazon, Book Depository, Barnes & Noble or other bookstore chains and independents around the world. There's a WH Smiths not 500 metres from my workplace that's currently selling Batman: The Court of Owls, for example. I'm pretty sales from that shop aren't covered here.

Just looking at sales for the first month of release, the highest-selling collected edition has been the hardcover Justice League: Origins with an estimated 8,855 copies sold to stores. Not far behind it is Batman: The Court of Owls with an estimated 8,173 copies. The lowest selling collected editions so far have been Mister Terrific: Mind Games, which only managed to shift 1,336 copies, and Static Shock: Supercharged, with 1,337.

What's interesting to me is the second and third month of sales - we have data for that for books published in May. Of the eight titles published in May (Batman, Justice League, Animal Man, Green Lantern, Catwoman, Wonder Woman, Justice League International, Green Arrow and Stormwatch) only two - Justice League International and Stormwatch - failed to make it into the Top 300 the following month. By the third month of sales (July), another three had dropped out: Green Arrow, Wonder Woman and Green Lantern. Animal Man and Catwoman continue to sell in the low hundreds, but I suspect both will drop off the list in August. The real winners of the first batch of titles are Batman and Justice League, both of which have continued to sell at least 1,000 copies in June and July. By the end of July, DC had shifted 12,875 copies of Batman: The Court of Owls to the direct market, and 11,392 copies of Justice League: Origins. 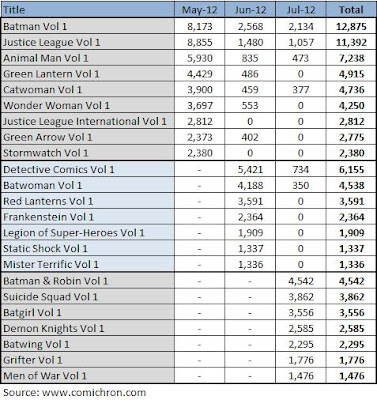 Books published in June and July haven't really enjoyed the same success, primarily because they've been generally less popular titles. Detective Comics: Faces of Death was June's highest-selling title with an estimated 5,421 copies sold, but in July it only managed to shift an addition 734 copies. Second-most successful was Batwoman: Hydrology with 4,188 copies sold, but again in July it underperformed with 340 copies sold. Most alarmingly, the other five collections published in June all dropped out of the Top 300: Red Lanterns, Frankenstein: Agent of SHADE, Legion of Super-Heroes, Static Shock and Mister Terrific. Two of those titles have already been cancelled of course, which doesn't help things - and I suspect Frankenstein will be joining them by the end of the year.

Onto July, where the highest selling title Batman and Robin: Born to Kill shifted an estimated 4,542 copies. That's pretty comparable to what the Batman titles are selling - this one falls between Detective Comics and Batwoman. Suicide Squad shifted 3,862 copies, disturbingly more than Batgirl (3,556). Demon Knights and Batwing sold 2,585 and 2,295 respectively, which is about par for second-string (i.e. non-Justice League related) titles. It's doubtful either will remain in the August charts, however. Men of War only managed to sell 1,476, but it's another cancelled title. Grifter only sold 1,776 copies - if I was working on that book right now I'd be quietly looking for alternative employment.
Posted by Grant at 9:42 AM