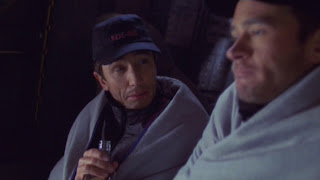 There's a phenomenon in American television called the "bottle show". Basically, any given series has to provide between 22 and 26 episodes (sometimes less, occasionally more) to the TV network each year. Some episodes are relatively cheap to make. Some are going to be more expensive. Now and then there might be an episode or two so expensive that savings need to be made further down the line. That's where you get the bottle show: an episode that only uses existing sets, doesn't shoot on location, and restricts its guest stars to just one or two - if any.

Keep that in mind when I explain that "Shuttlepod One" is an episode about Reed and Tucker trapped on a dying shuttlepod light years from the Enteprise with dimishing supplies and leaking oxygen. No guest stars, no extras, few visual effects. This is the most bottled-up bottle show I think I've ever seen.

The character problem is Reed: at first I found him underdeveloped and underexposed. Now that we're almost four months into the series I'm finding him generally unlikeable. I think part of it is Dominic Keating's performance, which feels a little too mannered and controlled compared to his co-stars. He comes across as permanently uncomfortable.

This characterization feeds into the conversations he shares with Tucker: basically because they involve an irritating character, they are mostly irritating conversation. There are some nice moments, and the occasional spot of well-played humour, but all in all it's a bit of a waste of time.

One big problem, in dramatic terms, is that we keep cutting between the two marooned officers believing the Enterprise has been destroyed, and the very-much-alive Enterprise going about its business. It kills the drama, even the feigned sort of drama you get when a TV show posits something clearly impossible (as if they're going to blow up the Enterprise 15 episodes into a series titled Enterprise).