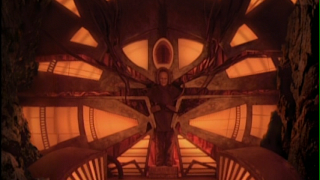 The Earth Alliance heavy cruiser Hyperion arrives at Epsilon III to stake Earth's claim on any technologies found there. The planet itself is set to explode, taking Babylon 5 with it. The only way to stop the destruction is for Delenn, Londo and Draal to escort a mysterious alien back to Epsilon III - but at least one of them won't be coming back.

"A Voice in the Wilderness" is unusual among two-part stories in SF television: I think the second half may be better than the first. Certainly the acting and dialogue seems to have taken a positive jump forward, helped in no small part by Ron Canada's performance as Captain Pierce, the arrogant commander of the Hyperion. There's an infectious enthusiasm in this episode, complete with movie-style climax, that's pretty hard for me to resist. It's not Babylon 5 at its finest or most dramatic, but it's certainly a lot of fun.

A lot of momentum is maintained throughout this episode by the regular introduction of extra complications. First it's the arrival of the Hyperion, which threatens to destabilise the neutral territory of Epsilon III. Then it's the realisation that the planet is going to explode, and there won't be enough time to evacuate all 250,000 residents on the station. Finally there's the arrival of an alien space cruiser, whose commander claims Epsilon III is their long-lost homeland. It all keeps things barrelling along - and that doesn't include Garibaldi's continuing panic over whether or not the love of his life is dead somewhere on Mars.

So yes, this episode is pulp - but it's enjoyable pulp, and there's a big audience for that sort of thing. It's the reason that series like Star Trek: Voyager and Stargate SG1 found such huge audiences. While there's always a place for intelligent, complex, multi-layered drama, there's also always a place for television that just lets its audience have a good time. The developing narrative of Babylon 5 can continue next episode (and oh boy, does it continue: the next episode is "Babylon Squared") but for now it's okay just to enjoy the moment.

That's eight good episodes out of nineteen, so Babylon 5 Season 1 scores 42%.
Posted by Grant at 9:08 AM