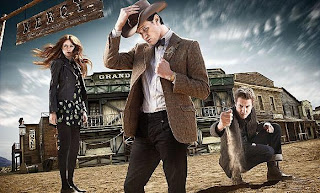 In the American 'old west', the town of Mercy is under siege from a cyborg cowboy that is holding the town hostage until they give up 'the alien Doctor'. Not our Doctor however, a different one - and one that has some upsetting secrets.

It's the Doctor Who western! We haven't had one since April 1966, so it's probably about time. Of course, budgets are a little more impressive for Doctor Who in the 21st century, so rather than recreating Tombstone on a small London soundstage we're on location in Spain using the same mocked-up western town set that Leone used for his spaghetti westerns with Clint Eastwood. As a result this episode is a treat for the eyes. Saul Metzstein (clearly the best new director on Doctor Who) hits every iconic western visual over the course of the episode, and Toby Whitehouse's script obliges with a lot of western scenes and dialogue as well. We've got the stranger riding into town, the showdown at noon, the saloon bar, the cowardly attempt at lynching a prisoner by the simple townfolk, and so on.

Of course what's really impressive is that all of the western elements simply act as backdrop to a morality play over crime and punishment. Kahler Jex, the alien doctor on the run from the cyborg, turns out to be the offworld equivalent of Josef Mengele. There are interesting questions raised over how Jex should be punished for his crimes, whether they should simply give him up to the cyborg, or rescue him from it. He can't be taken home to face justice: his side won the war, and as far as his own people are concerned he's a hero. The dilemma is enhanced marvellously by Adrian Scarborough, who gives a sensitive performance as a doctor somewhere between being a guilt-ridden victim and an inhuman monster. It's also a dilemma that pushes the Doctor right to the edge, where he winds up almost forcing Jex to his death at gunpoint. 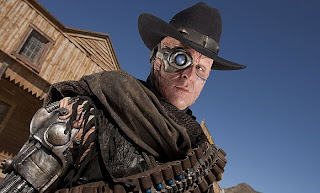 So this is the third week in a row where the Doctor is acting out of character and cold-bloodedly trying to murder the bad guys - only this time Amy calls him out on it. It's a shame - I was wondering if they were going somewhere with this, like the Doctor still being infected by Dalek nanomachines from episode 1, but instead we seem to just be re-treading territory already covered with David Tennant's Doctor. The Doctor needs companions because they're what grounds him to his own humanity. I suppose that "The Runaway Bride" was five years ago now, and there's obviously a new generation of kids who probably haven't seen it, but it still feels as redundant as a Peter Davison serial where the Master apparently dies at the end.

The episode has other problems too. For one thing, the Doctor plays little part in resolving the narrative - in fact, the only significant change he enacts on the situation is that he gets the town sheriff (Farscape's Ben Browder) killed. This seems to go without notice. For another thing, Amy and Rory get precious little to do this week - although there is a nice continuing motion of easing their characters out of the series. I'm getting the impression that, like Martha Jones, they're going to want to leave the Doctor rather than be forced to. There's a nice scene between Amy and Jex about the fact that she's a mother. I do feel the series dropped the ball last year in regards to how Amy coped with pregnancy and motherhood, and this scene helped to redress at least a little bit of it.

For once the episode didn't feel rushed - it comfortably ran for its duration with a beginning, middle and end. This has been a perpetual problem for Doctor Who since 2005, and it's nice to see them manage to plot a story with sufficient length once in a while.

Overall it's a faulty but solid episode, with some great guest performances (particularly Browder and Scarborough) and some lovely dark material for Matt Smith to play with. Not perfect, but still rather solid - much like this season thus far in general. We're still at 100% good.
Posted by Grant at 9:53 AM