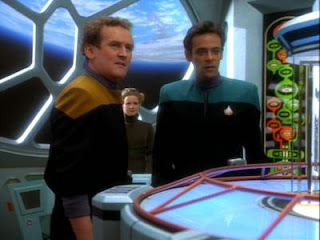 "Armageddon Game" is an episode combining both good and bad elements. It's good for character, and developing the relationships between the station's crew members, but it's dropped into a fairly weak framework. It's a generic, fairly uninteresting plot, but the conversations within make it more than worth the viewer's while.

This is an O'Brien and Bashir episode, allowing the two characters to spend a lot of time in conversation while waiting for rescue. It's warmly written stuff, comparing and contrasting their two lives. O'Brien is married, settled down, a bit cynical and jaded. O'Brien is an eternal optimist, young, brash and hopelessly romantic. Their friendship is one of my favourite elements of Deep Space Nine, and I'd forgotten how far this episode goes toward cementing that friendship.

Other leads get some great moments: Kira and Dax discussing their memories of Julian, Quark's wonderfully Ferengi-esque toast to the fallen comrades (both hilarious and touching), and Sisko's awkward breaking of news to O'Brien's wife Keiko.

Unfortunately the main plot is generic for the first half, and fairly ridiculous in its conclusion. It's also hampered by some fairly wooden acting and ridiculously silly alien make-up. Some Trek aliens-of-the-week get silly bumpy heads, but the unlucky ones get silly hairstyles. This is a silly hairstyle week.

So what we have is a crushingly flawed episode containing lots of good bits. That leaves me a bit unsure of how to rate it. Overall it's not good, so it's not getting a point, but I do still encourage readers to give it a watch if and when you reach it. It's worth it for the parts, just not the sum. Nine good episodes out of 13: that's a progessive score of 69%.
Posted by Grant at 1:20 PM