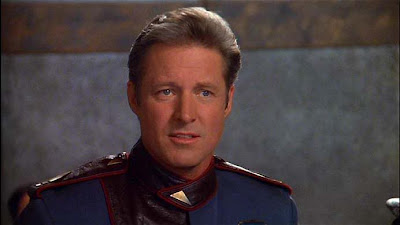 Captain John Sheridan is transferred from commanding the space cruiser Agamemnon to commanding Babylon 5. He inherits a fraught situation: staff in mourning after the death of President Santiago, a Chief of Security hovering somewhere between life and death, one ambassador missing and another hidden inside a cocoon, and to top it all of a rogue Minbari battle cruiser has been seen near the station.All in a day's work, plus he still needs to make time for his traditional pep talk to the station crew.

So here we go with Season 2 of Babylon 5. All five seasons have titles: Season 1 was Signs and Portents, while Season 2 is The Coming of Shadows. There have been some changes made since "Chrysalis", so let's start by going through them in turn.
Commander Sinclair is gone, having been unexpectedly spirited away to become Earth Ambassador to Minbar. In his place we have John Sheridan, played by Bruce Boxleitner (Tron, Scarecrow and Mrs King). The change came at the behest of broadcaster TNT, who felt that Michael O'Hare's understated performance was too dry to be the lead of an action-oriented science fiction drama. Through mutual agreement O'Hare stepped down, and Boxleitner stepped in. He's a much more conventional actor, and certainly more charismatic, and I can't deny he does give the series a bit of a lift in terms of energy levels.

Of course this change could have played havoc with Straczynski's carefully planned story arc, so it's no surprise that - like Sinclair - Sheridan gets a fractious past with the Minbari and a love interest who spent her time exploring old ruined planets along the galaxy's outer rim. (It doesn't take a genius to work out that Catherine Sakai would have gone missing pretty early into Season 2 had Michael O'Hare been allowed to continue.)

Change number 2: the lighting. This might seem like a strange thing to notice, but they have definitely turned up the lights on the Babylon 5 sets. This is a double-edged sword. On the one hand it makes everything feel a bit more busy and optimistic, but on the other it tends to make the sure look even cheaper than in already is. 1980s script editor Andrew Cartmel has complained about the lighting in Doctor Who - basically that the BBC lighting designers always lit it like a shopping centre, so that any sense of mood or texture was lost and the series looked cheaper than ever. To be honest Babylon 5 now suffers from the same problem. Hopefully they'll turn the lights down again in an episode or two.

We have a new regular cast member in the shape of fighter pilot Warren Keffer (Robert Rusler). It's bizarre: I have no recollection of this character from my original 1990s watch of this series. He's just suddenly there, having playful conversations with the rest of the cast as if he's always been on the station and I just wasn't paying attention. Doing a quick bit of research on the Internet, I've discovered that his introduction was demanded by the network, and that Straczynski deliberately used him as rarely as possible before removing him from the series.

Finally we have new opening credits, that have an unintentionally hilarious opening shot of a CGI astronaut working on the station's exterior. He only has a simple animation: both arms waving up and down. Once you notice it, I swear you can't stop noticing it, and it gets funnier with every episode. The credits also have a new voiceover by Bruce Boxleitner, which is the most laconic, laidback recount of how terrible war is coming I have ever heard.

The core plot of the episode, regarding a rogue Minbari cruiser, feels like territory the series has already covered in Season 1. It felt like something that Babylon 5 should have moved past. It also feels more than a little like filler: Garibaldi begins and ends the episode in a coma, and Delenn begins and ends the episode in a cocoon. I wanted a resolution to the cliffhangers from "Chrysalis", and instead got what felt like the biggest dodge in resolving a cliffhanger after South Park's "Not Without My Anus".

The usual problems remain: attempts at comedy fall flat on their face, a lot of the dialogue feels pretty stilted, and the characterisation has a tendency to get two-dimensional. All in all, this is a pretty disappointing episode. Necessary to watch, probably. Worth recommending, not particularly. One episode in, and we've got a rolling score of 0%. (Don't panic, I'm sure it will improve.)
Posted by Grant at 7:47 AM