House Calls #1: "Asylum of the Daleks" 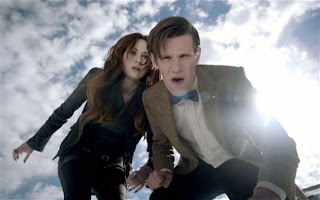 I've been reviewing several series episode-by-episode - Enterprise, Babylon 5, Star Trek: Deep Space Nine - so why not Doctor Who as well? It's my favourite TV series in the world, so why wouldn't I start reviewing it now that the seventh season has started?

The Doctor, Amy and Rory are plucked out of time and space by the Daleks and press-ganged into a special mission to the fabled Dalek Asylum - the planet where all of the broken, insane and uncontrollable Daleks are left to rot and decay. What the Doctor finds there is hidden underneath the cut so as not to spoil you any further.

"Asylum of the Daleks" is for the most part a great season opener, bringing back the Daleks in their most effective appearance in many years. It's an episode that within the first 10 minutes has advanced the depth and character of the Daleks more than the previous 49 years of the series combined. They have a Parliament and a Prime Minister now. They can make humanoid stealth Daleks. They have an aesthetic sense of beauty. They find hatred beautiful. They erected a massive Dalek statue on their home planet of Skaro.

Yes, Skaro, now not as destroyed as 1988's "Remembrance of the Daleks" may have led you to believe. Perhaps it's a continuity error. Perhaps they're treating John Peel's Dalek novels as canon. Perhaps the Time War brought it back. Or perhaps this is Doctor Who, which sniffs at continuity and laughs in its face - we're discussing, let us remember, a television series which has destroyed Atlantis three times. 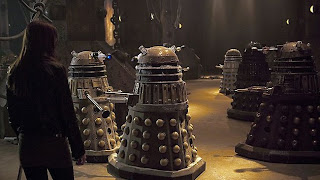 I adore the concept of a Dalek asylum, and it gives the episode the excuse to drop in dusty, decaying versions of different Dalek designs from 1963 to the present. I gave a little cheer at seeing the Special Weapons Dalek, one of my personal favourites. This is the sort of pleasing little touch that only shows as old as Doctor Who get to play with.

Matt Smith returns as the Doctor, playing the part in the same vein as he did last year: slightly less manic and energetic than his original portrayal, and with some nice layers of depth and mood. The Ponds are back, a little worse for wear - they're filing for divorce, which gives the Doctor another problem to fix while negotiating a planet full of insane Daleks and talking to the mysterious Oswin who's trapped somewhere in the middle of them.

Oswin: a mysterious genius computer hacker trapped in the centre of the Dalek asylum, played by Jenna-Louise Coleman - the actress introduced as the Doctor's new companion starting this Christmas. It was a superbly well-kept secret, despite at least four screenings in the UK and USA prior to the episode's broadcast. It's nice to be surprised now and then, and I was certainly surprised at her unexpected early debut.

It's not a debut without problems, however; the first is that Oswin's secret is blatantly obvious from about five minutes into the episode, and the second is that she's actually ridiculously irritating. She's a walking cliche, the overly clever "manic pixie girl" who can't hold a conversation without flirting, drops it lines about experimenting with bisexuality, and who lounges around in a tight red minidress delivering not so much dialogue as an unending series of quips and one-liners. She feels almost entirely constructed for a heterosexual male gaze, and I really hope that - assuming Coleman returns as the same character on Christmas Day - they tone her personality down a bit. A manic Doctor running around with a manic companion delivering quips and one-liners at a million miles an hour is going to be very trying viewing. It's left me wondering: looking at Oswin, River and Amy in Doctor Who, Lynda Day in Press Gang, Susan, Sally and Jane in Coupling - has Moffat ever written a sensible, well-adjusted female protagonist in any of his television work? The only one I can come up with is Sally Sparrow in his Doctor Who episode "Blink", and she only appeared for the one episode. I adore Steven Moffat's writing, and have been a big fan of his tenure as Doctor Who, but I do think female characters are one of his blind spots.

The episode also feels a little rushed: there's an entire plot thread about nano-machines turning people into Daleks that is simply dropped and ignored during the climax, Amy and Rory go from hating one another to passionately loving each other a bit too conveniently, and the Doctor's final discovery that Oswin is indeed a Dalek leads a very sudden and callous choice on his part to abandon her and let her be destroyed in a planetary explosion. (Although I'm guessing she's only mostly dead, since she's back for Christmas.) One last-minute development that did intrigue me was Oswin's final gift to the Doctor - all knowledge of his existence has been erased from the memory of every Dalek in the universe.

Overall this episode is pretty good. Some part are very good. It's the best use of the Daleks since "Doomsday" back in Season 2. It's a great launching point for the new season: the universe believes the Doctor's dead, and now his arch-enemies don't even know he exists. If only Oswin wasn't in the middle of it all, doing her manic flirty thing, being trite and obvious, stinking up the whole episode around her. The episode still gets a tick of approval, but it almost got derailed.