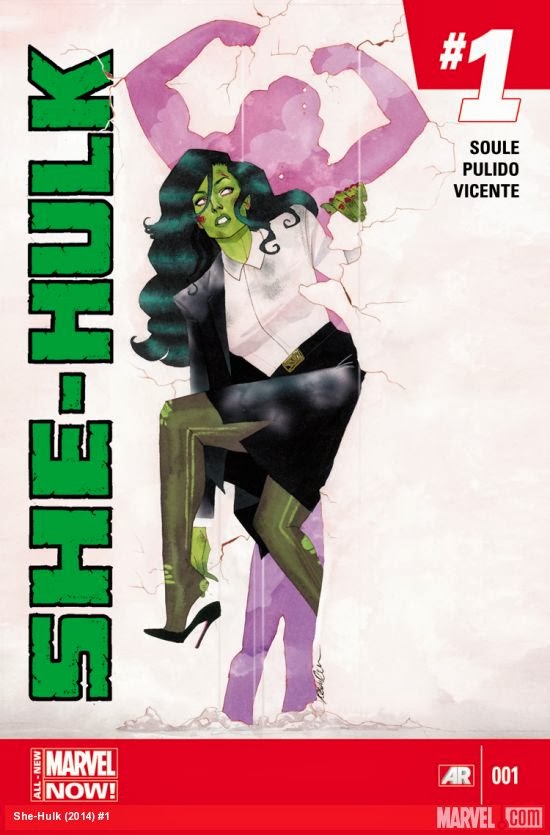 While I've always been more of a DC fan than a Marvel fan, I've always had a place in my heart for She-Hulk. It's not the character so much as the way that she's been written. I first read her adventures via writer John Byrne, who wrote a stunning and inventive series where Jennifer (She-Hulk) would regularly break the fourth wall and address the reader, complain about her predicament and even criticise the writing. It was one of Marvel's best titles at the time.

Later iterations of the title continued to be impressive, albeit less distinctive. Never ashamed to relaunch old hits, Marvel has now added She-Hulk to its growing list of "All-New Marvel Now" first issues, and it hit comic shops both physical and digital this week.

My first impression of the book is that Hawkeye has clearly had an effect on Marvel, because not only have they continued to give its creative a pretty long leash in terms of deadlines and publishing schedules, they're now copying the formula with She-Hulk. Just like Hawkeye shows what Clint Barton does when he isn't fighting in the Avengers, She-Hulk shows what Jennifer Walters does when she isn't fighting in the Avengers or filling in for the Fantastic Four. What she does is practice law.

Yes, stupid as this sounds She-Hulk is a humorous comic book about a lawyer. Think Ally McBeal or L.A. Law, only with a giant super-powered green heroine instead of Calista Flockhart. Javier Pulido's stark, simple art pops off the page and Charles Soule's script absolutely sparkles, and it's all wrapped up in a simply beautiful cover by Kevin Wada.

Marvel has published some outstanding books in recent years, and that list is topped (in my mind) by Hawkeye and Daredevil. She-Hulk is, based on the first issue, just as good as those two books. I hope this one runs and runs - it deserves it. (5/5)

Under the cut: reviews of All-New X-Men, Batgirl, Batman, The Fuse, Justice League 3000, The Mercenary Sea, Thor: God of Thunder and X-Men Legacy.

You can tell that Bendis is having a whale of a time writing the dialogue on this issue, in which the X-Men team up with the Guardians of the Galaxy to rescue Jean Grey from the intergalactic Shiar Empire. It's incredibly funny stuff, and moves along at a pretty breezy pace. Iceman continues to be one of the funniest characters Bendis has written, and I'm loving the Guardians - I think I need to start picking up that series in trade paperbacks pretty soon. There's a big cliffhanger reveal that was kind of lost on me, but if you're a more educated Marvel reader than I it might have the desired effect. (4/5)

One of the things I really enjoy about Gail Simone's run on Batgirl is how she's cleverly built up a whole set of exclusive villains and supporting characters to ensure that Barbara Gordon's world can stand on its own two feet and not rely on too much cross-pollination from Batman's more popular titles. This issue she's on the hunt for a missing girl, aided by ex-Court of Owls assassin Strix and hunted by a madman who thinks she's a vampire. It makes more sense when you read it, and you should read it - it's entertaining stuff. (3/5)

So here's the thing: Batman #28, the original version of it, got delayed. Rather than skip a month DC has instead published this slightly bizarre one-off issue that's set somewhere in the middle of Batman Eternal, their upcoming year-long weekly comic book. It's basically a look into where Batman's life will be one year from now. On the one hand I'm kind of irritated by that, because it means DC are basically asking me to pay US$3.99 for a lengthy advertisement for an upcoming title. On the other hand, it's got great art, an entertaining bit of story and at least two major reveals that had me climbing the walls with excitement. I don't want to spoil either of them. I just want to say that Batman in 2015 looks pretty damned awesome. (4/5)

Not content with writing a fantastic fantasy comic (Umbral), Antony Johnson is now writing a new sci-fi monthly as well. The Fuse is a police procedural teaming a German rookie cop with a cynical old Russian veteran. The first issue introduces their first case together: the mysterious shooting of a homeless woman. The twist? It's all set inside a massive space city orbiting the Earth. This is a perfectly constructed blend of detective and science fiction, and yet another sterling SF comic book to add to Image's expanding line of genre books. (5/5)

I wasn't fully impressed with the first issue of Justice League 3000, but gave it the benefit of the doubt. I continued have my doubts with the second issue, but for some reason found myself picking up the third. I'm glad I did: things finally snap into place with this issue, and it's become a great blend of superhero comic and science fiction adventure. Finally there's an ongoing story that I can engage with, and characters that I have started to warm to. Before reading this I'd have advised you to give Justice League 3000 a miss: now I've changed my mind. This is really good stuff. (4/5)

I've been really impressed with the continuing run of outstanding comics from Image, and when I heard they were publishing a 1930s adventure comic I was keen to get it a shot. I wish I could say I was satisfied, but the sorry fact is that The Mercenary Sea is one of the weakest comics I have read in ages. The writing is sufficient but not particularly original, while the artwork by Matthew Reynolds is grossly substandard by Image's usual quality. Weak proportions and pencilling is masked by some stark colouring that simply doesn't match the writing. I wish the creative team all the best - no one wants artists to fail - but I'm not onboard for this book. (1/5)

I double-checked because I embarrassed myself getting it wrong last month: this issue sees the return of Esad Ribic to Thor: God of Thunder, illustrating the next big story arc for Thor. The art is gorgeous, and the story looks exceptionally promising - particularly because it's split between the present-day Thor and the ancient millenia-old Thor from the initial "Godkiller" story arc. I'm glad to see old Thor - and his three daughters - back in the comic. It's stunning stuff, with a stunning cliffhanger to boot. (5/5)

Simon Spurrier's 24-part epic storyline comes to an end with this issue. X-Men Legacy has consistently been one of my favourite comics for the past year, and I honestly don't know what to think of the ending. On the one hand it's beautifully written and perfectly characterised, and comes with a wonderfully bittersweet ending. On the other hand, it's a total 'big red button' reboot of the entire series so that, as far as the Marvel Universe is concerned, it never happened - and I hate that shit. I genuinely hate it with a passion. I can deal with it in a TV show when it's on an episode-by-episode basis, but for goodness sake this has been 24 issues. That's 480 pages of story, ending in a conclusion where none of it ever happened. As I said, however, it is very well written. (2/5)

This is the 675th post on The Angriest. Thank you for reading.
Posted by Grant at 11:20 PM