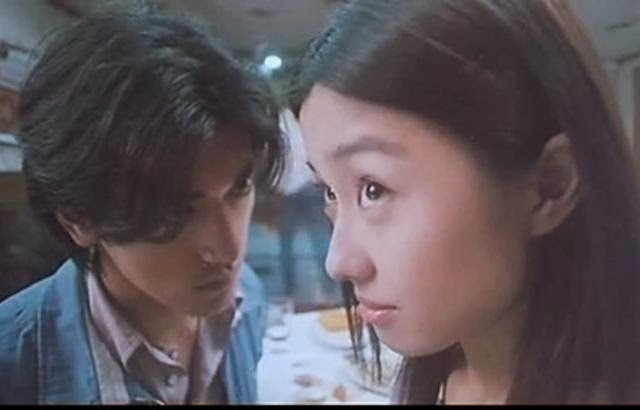 First Love: The Litter on the Breeze is an oddity: a semi-experimental portmanteau film directed by Eric Kot Man Fai and produced by Wong Kar-Wai. The simplest explanation for the film is that it tells two stories of first love: one of a romance as it begins, and another of a romance long after it ended.

The complicated explanation for the film involves explaining how the film is constantly narrated, interrupted, criticised and apologised for by its director. He talks over a romantic moment to explain how it incorporates his favourite camera shot from the movie. He describes at length all of the different ideas he initially had for the film. In one scene he apologises that actress Karen Mok wasn’t able to make it for the shoot one day, so he’s put on a dress and a wig to stand in for her. The end result of all of these directorial interruptions is a film that is deeply irritating, or at least certainly a film that isn’t half as funny or clever as it seems to think it is. That said, the occasional moment of beauty or clarity slips through – this is a film for those who want to see how experimental Hong Kong cinema can go, or for the die-hard completists following producer Wong Kar-Wai’s career.

The film is arranged into three sections. The first, in which Eric Kot – who also works as a comedian – describes the development and writing of the film, is almost unwatchable. It is tediously smug and self-aware, and seems considerably more impressed with itself than its audience will be. I would not be surprised to find most viewers of First Love never make it past the first 30 minutes.

The second section tells the story of a budding romance between a young woman with a habit of sleepwalking (Lee Wai-Wai) and a garbage collector (Takeshi Kaneshiro) who takes it upon himself to keep her safe as she unconsciously wanders the streets of Kowloon. It is an odd, sweet romance, and is appealingly played by its two leads. Kot’s constant narration settles down somewhat from here on in, and manages to change from being annoying to being quite an interesting form of post-modern comment.

The third and final section stars Kot as a man who meets his first love (Karen Mok) again ten years after leaving her at the altar. It is certainly the most traditionally presented part of the film, yet somehow lacks the energy of the middle section.

Christopher Doyle, the Australian cinematographer who has been – and continues to be – a close collaborator of Wong Kar-Wai’s, also shoots this film. He gives it a typically lush and attractive look, full of interesting angles and handheld camera work and rich with colour.

First Love is an interesting experiment at times, but I think it has to also be considered a failed one. The parts that work, notably Kaneshiro and Wai’s sleepwalking romance, work wonderfully. The parts that don’t, such as Kot’s lengthy introduction, almost derail the rest of the film. All up, it’s an odd mixed bag of a film. Interesting yet irritating. Engaging yet tedious. What is the viewer to do?

This review was originally published on the Eiga: Asian Cinema website.
Posted by Grant at 10:36 AM