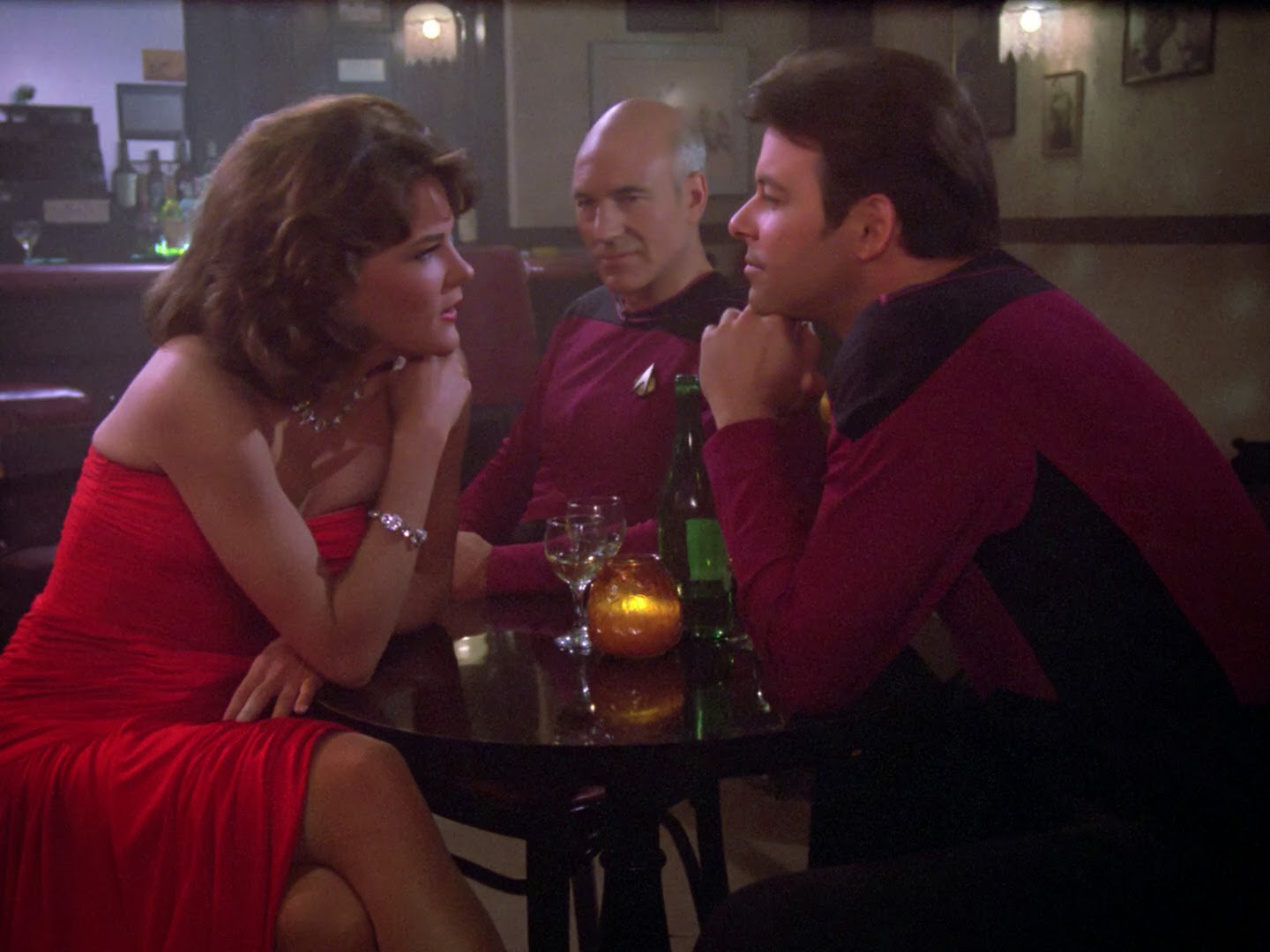 The Enterprise returns to spacedock after several months exploring the galaxy. A group of cybernetic aliens called Bynars are brought onboard to supervise the re-calibration of the Enterprise's computer systems - only once left to their own devices they steal the ship, with an unwitting Picard and Riker still onboard.

First and foremost, I love that the title of this episode is in binary. It's rather amusing and really makes it stand out among some of the more boring episode titles this season. It's also fun to say out loud: 'I watched an episode of Star Trek the other day. Which one? Oh, it was one one zero zero one zero zero one.' Sadly it's more fun to say the title than it is to watch the episode. There's a reasonable idea here, but as is often the case with these early Next Generation episodes the execution is an enormous faceplant on the television screen.

Creating a civilization that is so dependent on its technology that each individual brain has been artificially wired into a central computer is a great concept, so good in fact that the production team will revisit it soon when they create the Borg. The Bynars' reason for stealing the Enterprise - they need its computer system to upload their entire civilization for a necessary reboot - is also a great one. From thereon out it all starts to fall apart. The Bynars themselves look remarkably silly: short blue people with weird voices. They're also called Bynars, which is such an obvious steal from the word 'binary' (they speak computer language and travel in pairs) that it just sounds ridiculous. It is like when George Lucas took leave of his senses during the Star Wars prequels and started naming evil characters Sidious and Grevious: it's so on the nose the nose is in danger of collapsing.

The Bynars distract Riker from the fact that they're stealing the ship by creating for him an enhanced holodeck where he becomes smitted with a computer-generated woman named Minuet. It's a really creepy series of scenes as Riker flirts and attempts to chat up a woman that he knows is not real and that it can't go anywhere. Oh God I hope it can't go anywhere. Do people have sex on the holodeck? Everything in there's made of light - turn the simulation off, and who cleans up the remaining mess? I love Riker as a character, and always have, but it annoys me intensely when weak and lazy writing leads to "Sleazy Riker" appearing on screen. His scenes throughout this episode are excruciating to sit through. And then Picard turns up, and the fictional Minuet starts flirting with him as well, and from there it's simply a matter of watching two grown men fawn over a non-existent woman like two adolescent boys staring at Lara Croft's ass while playing Tomb Raider.

I'm assuming this was a 'bottle show', an episode where as little money is spent as possible in order to spend more money on other episodes elsewhere in the season. There are two new sets - a Jazz bar and a generic office. Almost all of the model shots are re-used footage (the spacedock is from Star Trek III, for example), and there are only a couple of speaking guest roles. That might explain the episode a bit, but it certainly doesn't forgive it.