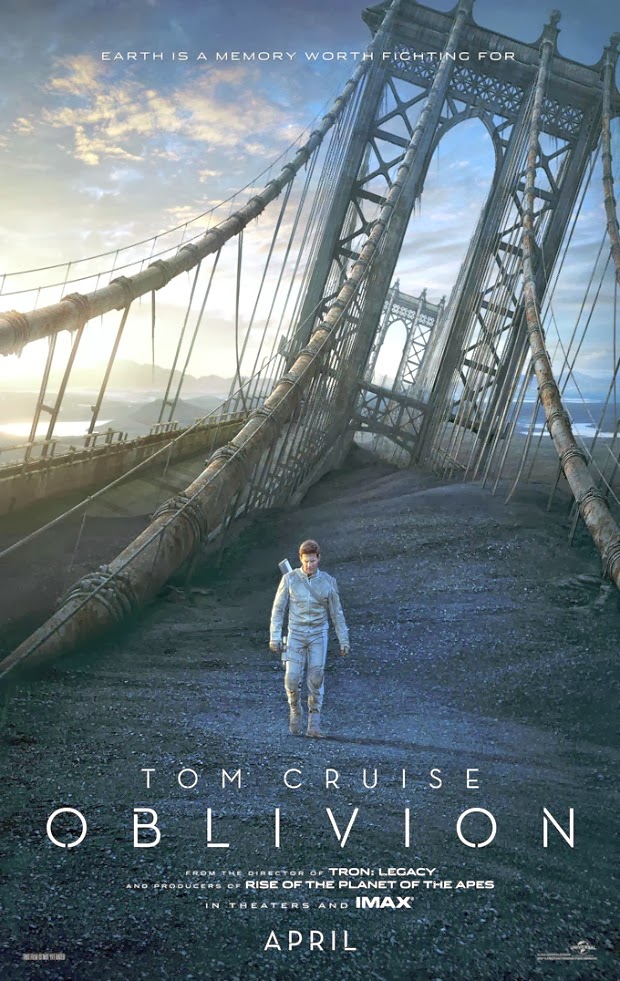 The year 2077: technician Jack Harper is tasked with repairing security drones in a post-apocalyptic Earth. The human population are all living on Titan while he and his partner Vika oversee the slow mechanical preparations for humanity's return. One day a 60 year-old space module crashes to Earth, and its sole survivor throws Jack's entire life into chaos as he struggles to discover the truth behind his mission and his life.

Oblivion is a film with good ideas and great intentions, but the parts never quite seem to gel together to make a cohesive whole. Part of the problem is the pace: this is a film that regularly drags, backed by a monotonous droning score and populated with characters who all talk in the same slightly intense, slightly measured fashion. It's a style that actually worked very well for Joseph Kosinsky in his previous film, Tron Legacy, but that was set inside a computer. This is supposed to be set in real life. The film's best parts are back-loaded into its final half hour, and it took me quite an amount of effort to set through the preceding 90 minutes to get there.

Kosinsky has said that Oblivion was inspired by the science fiction films of the 1970s: Solaris, Silent Running and so on. It's easy to see their influence on Oblivion, although in a 21st century context their deliberately slow, meditative pace doesn't really work any more. It's a problem caused by conflicting styles: the pace may reflect those older movies but the visual aesthetic and action scenes all feel much more contemporary. For a more successful take on 1970s SF cinema one only needs to look to Duncan Jones' superlative Moon. The difference is obvious.

One influence Kosinski doesn't seem to mention is Steven Lisberger's 1989 film Slipstream. It's oddly fitting that, after making his debut directing a sequel to Lisberger's first film Tron, Kosinski now draws so much inspiration from Lisberger's underrated second film. The similarities drive home how much Oblivion is a remix of earlier, generally superior works, and simply doesn't have enough of an identity of its own to impress.

The cast, while all fine actors, typically don't give strong enough performances. They are all oddly sedate, given very little to work with in terms of personality and all hitting the same softened emotional beats. Tom Cruise is an actor I usually enjoy, but here he feels about a decade too old for the part he's playing. Both of his female co-stars, Andrea Riseborough and Olga Kurylenko, are a full 15 years younger than him. By including romantic relationships between Jack and both of his female co-stars the film slips into a somewhat tedious cliche. The film's treatment of women in general is not great: one (Kurylenko) gets to play the winsome love interest and maiden-in-distress, while the other (Riseborough) has to make do with playing the jealous lover.

There is good stuff in Oblivion, but it's half-buried. Finding the good parts requires wading through the bad. This is a film where each individual viewer's mileage may vary considerably. For me there was too little reward for too much waiting; more patient viewers may find a very different film to me.
Posted by Grant at 8:05 AM