Star Trek: The Next Generation: "Too Short a Season" 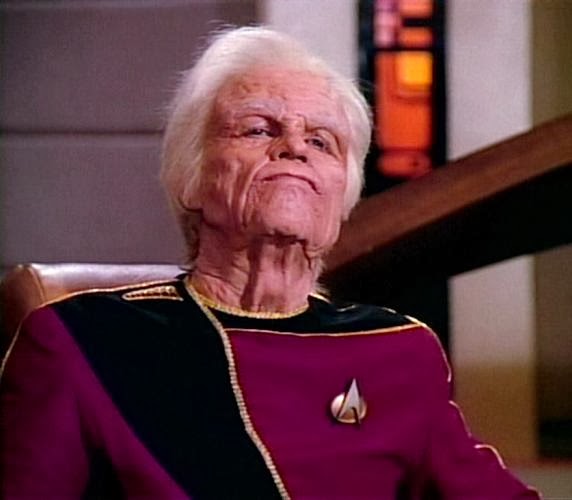 I always find this a weird episode to watch. Let me explain why. Back in the late 1980s Paramount started releasing Star Trek: The Next Generation onto VHS in Australia, with two episodes on each tape. This is how I originally watched The Next Generation, renting each tape from the local video library as they came out. In total they released 12 volumes - 23 episodes, including the double-length pilot. The thing is, and I honestly didn't realise this for some years, Star Trek: The Next Generation has 25 episodes. "Too Short a Season" and "Home Soil" were never released. I've seen both of those episodes much less often than the rest of the season (although, to be honest, I haven't watched this season at all in about decade). They still feel weird, like sneaky little extra episodes that aren't really supposed to be there.

In the case of "Too Short a Season", not seeing it back in 1988 wasn't a great loss. It's not the worst episode of the season - far from it - but it's also fairly dull, hopelessly predictable and a bit of a chore to get through. On an alien planet, terrorists have taken hostages. The planet's governor demands that an elderly Starfleet admiral return to the planet, where he once negotiated peace, to plead for the hostages' release. While the Enterprise transports the admiral, he undergoes a startling transformation - he's mysteriously getting younger.

There's a plot twist in this episode that is really easy to guess early on. The rest of the episode is dedicated to watching the lead guest actor rapidly get younger and younger, starting off as an elderly man and finishing as a guy in his twenties. For this to work the episode needs to have a strong script, a good actor and convincing old age make-up. It gets... not one of these right.

The old age makeup is perhaps the one area where we should be particularly forgiving, since it's a difficult one to do convincingly at the best of times. It is bizarrely fake, however, leading you to wonder why they've bothered to cast a young actor in makeup for the first five minutes. Once the first bout of de-ageing takes place, it is of course tediously obvious.

The script is not particularly good, and that's a much bigger problem. There isn't a lot to "Too Short a Season", so once it's clear what's happening you really are just drumming your fingers waiting for it all to end. To be fair it's not egregiously awful like some other Season 1 episodes, but it is still a total bore. Finally there's the casting of Clayton Roehner as Admiral Jameson. He's simply no good. He performs an old man like a caricature of one. There's no subtlety, just pantomiming.

This episode isn't the worst thing you'll ever see, but it is a frightful bore. That leaves us 15 episodes in, and there have still only been four half-decent episodes. That's a quality ratio of (drum roll)... 27%.
Posted by Grant at 2:32 PM