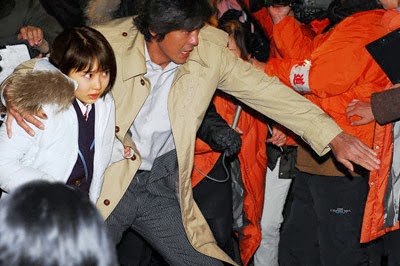 Nobody to Watch Over Me, which was Japan's official entry to the 2009 Academy Awards (it wasn't shortlisted), is a taut police drama that exposes one of the less attractive aspects of Japanese culture. We often assume law and order is relatively uniform across the developed world, when in fact it can vary considerably. In Japan there is a widespread assumption that if someone is arrested for a crime, then they are almost certainly guilty of it. There is also an enormous prejudice against the accused's family: if you raised a child who committed a crime, then you are by a certain logic also to blame. The families of those accused of serious crimes are hounded by the media, often verbally abused by random strangers, and placed under the most unwelcome of spotlights precisely at a time when they desperately need privacy and peace. People have been known to commit suicide from the stress and the shame. The police are often required to provide protective services.

This strange, pretty unpleasant quirk of Japanese culture forms the basis of Ryoichi Kimizuka's film. A teenage boy is arrested for the murder of two young girls. While he is questioned by the Tokyo police, his 15 year-old sister Saori (Mirai Shida) is placed in the custody of police detective Takumi Katsuura (Koichi Sato). Katsuura is not simply tasked with protecting Saori: he is also expected to get her to talk, and to provide incriminating evidence on her brother.

This is a solid, well-executed police drama. Its characters are interesting and flawed. The story progresses in fascinating directions. If it has any significant flaw, it's that it tends to neglect one of its plot threads - a journalist trying to get access to Saori by digging up dirt on Katsuura's past - but in the grand scheme of things that's a minor quibble.

Koichi Sato gives a very strong central performance as Katsuura. His marriage is failing. He is haunted by a horrifying mistake some years ago that cost a child their life. He is supposed to be going on leave, and instead finds himself guarding a traumatised and resentful 15 year-old. Sato's performance is a relatively quiet one, allowing much of his personality and inner conflict to come out in the silence. His weariness and melancholy makes him a very sympathetic character.

Saori is initially a much more difficult character to engage with, but that's visibly intentional. We warm to her as Katsuura does, as time slowly allows her to let her guard down and open up to him. There's a wonderful growing bond between the two characters that never feels forced.

All up this is a fairly traditional police drama with a strong point of difference and a deep grounding in Japanese culture. The strong characters and interesting narrative will keep your attention for the two hours' running time, but the culture and prejudice that underpins the story will stick in the back of your mind for much, much longer.
Posted by Grant at 9:31 AM